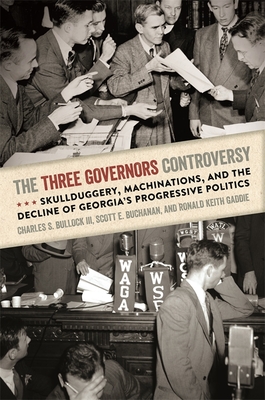 The death of Georgia governor-elect Eugene Talmadge in late 1946 launched a constitutional crisis that ranks as one of the most unusual political events in U.S. history: the state had three active governors at once, each claiming that he was the true elected official.

This is the first full-length examination of that episode, which wasn't just a crazy quirk of Georgia politics (though it was that) but the decisive battle in a struggle between the state's progressive and rustic forces that had continued since the onset of the Great Depression. In 1946, rural forces aided by the county unit system, Jim Crow intimidation of black voters, and the Talmadge machine's "loyal 100,000" voters united to claim the governorship. In the aftermath, progressive political forces in Georgia would shrink into obscurity for the better part of a generation. In this volume is the story of how the political, governmental, and Jim Crow social institutions not only defeated Georgia's progressive forces but forestalled their effectiveness for a decade and a half.
Charles S. Bullock (Author) CHARLES S. BULLOCK III is Richard B. Russell Professor of Political Science at the University of Georgia and the author and editor of numerous books on American political culture, the South, and electoral politics. Scott E. Buchanan (Author) SCOTT E. BUCHANAN is professor of political science at the Citadel. He is the author of Some of the People Who Ate My Barbecue Didn't Vote for Me: The Life of Georgia Governor Marvin Griffin. Ronald Keith Gaddie (Author) RONALD KEITH GADDIE is Executive Faculty Fellow of the University of Oklahoma and Presidential Professor of Political Science.