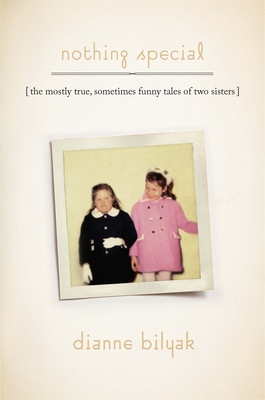 
Title unavailable, please email for information.
A memoir about disability and siblinghood that is candid and comical

Nothing Special is a disarmingly candid tale of two sisters growing up in the 1970s in rural Connecticut. Older sister Chris, who has Down syndrome, is an extrovert with a knack for getting what she wants, while the author, her younger, typically developing sister shoulders the burdens and grief of her parents, especially their father's alcoholism. In Nothing Special Bilyak details wrestling with their mixed emotions in vignettes that range from heartrending to laugh-out-loud funny, including anecdotes about Chris's habit of faux smoking popsicle sticks or partying through the night with her invisible friends. Poet and disability advocate Dianne Bilyak strikes a rare balance between poignant and hilarious as she paints a compassionate and critical real-world picture of their lives. They struggle, separately and together, with the tension between dependence and independence, the complexities of giving versus receiving, the pressure to live as others expect, and in the end, the wonderful liberation of self-acceptance.
DIANNE BILYAK (Stafford Springs, CT) is a Pushcart-prize nominated writer, graduate of the Yale Divinity School, and Connecticut disability rights advocate. Her book of poems Against the Turning was published by Amherst Writers & Artists Press in 2011, and her poetry has also been featured in Meat for Tea, Freshwater, Drunken Boat, The Massachusetts Review, and The Tampa Review.