The Sound of Things to Come: An Audible History of the Science Fiction Film (Paperback) 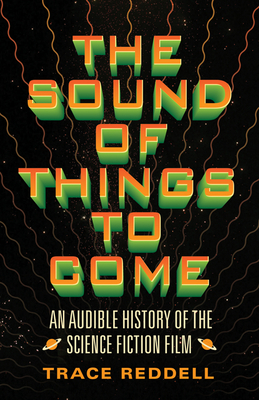 Including original readings of classics like The Day the Earth Stood Still, 2001: A Space Odyssey, Star Wars, and Blade Runner, The Sound of Things to Come delivers a comprehensive history of sound in science fiction cinema. Approaching movies as sound objects that combine cinematic apparatus and consciousness, Trace Reddell presents a new theory of sonic innovation in the science fiction film.

Reddell assembles a staggering array of movies from sixty years of film history—including classics, blockbusters, B-movies, and documentaries from the United States, Britain, France, Germany, Japan, and the Soviet Union—all in service to his powerful conception of sound making as a speculative activity in its own right. Reddell recasts debates about noise and music, while arguing that sound in the science fiction film provides a medium for alien, unknown, and posthuman sound objects that transform what and how we hear.

Avoiding genre criticism’s tendency to obsess over utopias, The Sound of Things to Come draws on film theory, sound studies, and philosophies of technology to advance conversations about the avant-garde, while also opening up opportunities to examine cinematic sounds beyond the screen.

Trace Reddell is associate professor of emergent digital practices at the University of Denver.

"The Sound of Things to Come is a lively, endlessly inventive exploration of the sonic worlds of science fiction cinema (beginning even before the advent of synchronized sound). The breadth and subtlety of Trace Reddell’s interdisciplinary scholarship is impressive, and his book is an ongoing homage to the valuable conceptual and cognitive challenges upon which effective science fiction depends."—Scott Bukatman, Stanford University

"Building on the highly original concept of the sonic novum, Trace Reddell has written the first comprehensive theoretical approach to musical science fiction. The Sound of Things to Come is an alternative history of science fiction cinema, a handbook of sophisticated close analyses of many important films, and a re-envisioning of the role of sound technology in modernist aesthetics."—Istvan Csicsery-Ronay, author of The Seven Beauties of Science Fiction Studies