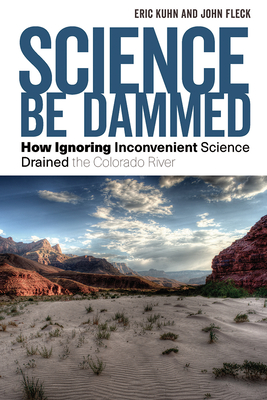 Out of Print
Science Be Dammed is an alarming reminder of the high stakes in the management—and perils in the mismanagement—of water in the western United States.  It seems deceptively simple: even when clear evidence was available that the Colorado River could not sustain ambitious dreaming and planning by decision-makers throughout the twentieth century, river planners and political operatives irresponsibly made the least sustainable and most dangerous long-term decisions.

Arguing that the science of the early twentieth century can shed new light on the mistakes at the heart of the over-allocation of the Colorado River, authors Eric Kuhn and John Fleck delve into rarely reported early studies, showing that scientists warned as early as the 1920s that there was not enough water for the farms and cities boosters wanted to build. Contrary to a common myth that the authors of the Colorado River Compact did the best they could with limited information, Kuhn and Fleck show that development boosters selectively chose the information needed to support their dreams, ignoring inconvenient science that suggested a more cautious approach.

Today water managers are struggling to come to terms with the mistakes of the past. Focused on both science and policy, Kuhn and Fleck unravel the tangled web that has constructed the current crisis. With key decisions being made now, including negotiations for rules governing how the Colorado River water will be used after 2026, Science Be Dammed offers a clear-eyed path forward by looking back.

Understanding how mistakes were made is crucial to understanding our contemporary problems. Science Be Dammed offers important lessons in the age of climate change about the necessity of seeking out the best science to support the decisions we make.
Eric Kuhn, recently retired, worked for the Colorado River Water Conservation District from 1981 to 2018, including twenty-two years as general manager. The district is a water utility and policy agency covering most of the Colorado River basin within Colorado.

John Fleck is director of the University of New Mexico’s Water Resources Program. He wrote Water Is for Fighting Over and Other Myths About Water in the West.

"It’s juicy material, and it offers lessons that resonate now. Kuhn and Fleck dig into how we come to terms with the mistakes of the past, how only referencing convenient science can screw us in the future (alert! alert!), and how we should better manage our limited resources."—Heather Hansman, Outside

“Kuhn and Fleck remind us we can excavate the past and hold decision-makers accountable, in part by making sure that science isn’t ignored, diminished or squelched altogether.”—Laura Paskus, High Country News

"[This] book is quite timely given that current managers need to reconcile those problems for a river that supplies drinking water for upwards of 40 million people in the United States and Mexico, and provides incredibly important agricultural water, recreational opportunities, endemic riparian species habitat, and unmatched beauty in its various reaches and canyons."—Water Alternatives Book Review