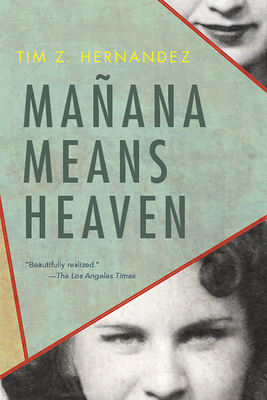 In this love story of impossible odds, award-winning writer Tim Z. Hernandez weaves a rich and visionary portrait of Bea Franco, the real woman behind famed American author Jack Kerouac’s “The Mexican Girl.” Set against an ominous backdrop of California in the 1940s, deep in the agricultural heartland of the Great Central Valley, Mañana Means Heaven reveals the desperate circumstances that lead a married woman to an illicit affair with an aspiring young writer traveling across the United States.

When they meet, Franco is a migrant farmworker with two children and a failing marriage, living with poverty, violence, and the looming threat of deportation, while the “college boy” yearns to one day make a name for himself in the writing world. The significance of their romance poses vastly different possibilities and consequences.

Mañana Means Heaven deftly combines fact and fiction to pull back the veil on one of literature’s most mysterious and evocative characters. Inspired by Franco’s love letters to Kerouac and Hernandez’s interviews with Franco, now in her nineties and living in relative obscurity, the novel brings this lost gem of a story out of the shadows and into the spotlight.
Tim Z. Hernandez is a poet, novelist, and performance artist whose awards include the 2006 American Book Award, the 2010 Premio Aztlán Prize in Fiction, and the James Duval Phelan Award from the San Francisco Foundation. In 2011 the Poetry Society of America named him one of sixteen New American Poets. He holds a BA from Naropa University and an MFA from Bennington College and is the author of the novel Breathing, In Dust, as well as three collections of poetry, including the recently released Natural Takeover of Small Things. Learn more at his website, www.timzhernandez.com.
"Hernandez's intimate knowledge of life amid the agricultural fields of central California and his ability to conjure the thoughts and emotions of the young Bea Franco make for a graceful and melancholy tale."—The Associated Press

"The story of Bea Franco—née Bea Renteria, aka Jack Kerouac’s 'Mexican girl,' or Terry, from his novel-cum-Beat-generation manifesto, On the Road—is a mesmeric tale born of Hernandez’s passionate curiosity. Based on extensive research and investigation, part fact, mostly fiction, and years in the making, this novel will thrill the millions of readers who have read Kerouac’s book and/or seen the movie adaptation. But no prior knowledge of Kerouac or his works is required: this is an entirely fascinating, stand-alone story in its own right."—Booklist

"Through documents, interviews and dogged research, Tim Z. Hernandez pieces together her life and the significance of that chance encounter that shaped both of their lives forever." —The New York Times

"Whether or not you are a Kerouac fan, Tim Z. Hernandez has created an important entry for the Kerouac canon that also stands on its own merits as a well-crafted novel about love and loss. Bravo."—Rick Dale, The Daily Beat

"Hernandez's portrayal offers a telling counterpoint to Kerouac's rendering, reclaiming Franco's agency and offering a depth and insight into her circumstances and the life of women like her who, both on the page and in everyday life, are too often consigned to anonymity."—Zyzzyva

"Hernandez gives incredible depth and dimensionality to the love story of Jack Kerouac and Bea Franco."—Los Angeles Review of Books

"Hernandez's choice to write [Bea's] story as fiction is gutsy, inspired, and does honor to Kerouac, who fictionalized the real-life characters he met in On The Road. The result is an earthy and soulful tale, a version of their improbable love affair that feels as true as Kerouac's."—Catch & Release

“There is no other novel like this in American publishing—Bea Franco’s story and her relationship with Jack Kerouac are vital, compelling, and absolutely necessary. Central California, with its history of immigration and agriculture, along with labor camps and workers, is a landscape presented in a different way here, and the women in these places are exactly the characters America desperately needs right now. They are all created in a singular way here.”—Susan Straight, author of Between Heaven and Here and Highwire Moon

"We become more savvy readers of Kerouac through the eyes of Hernandez's muse."—The Los Angeles Review

“Mañana Means Heaven provides an important counternarrative to the establishment of the ‘Beat Generation’ writers.”—Alex Espinoza, author of Still Water Saints: A Novel

“Not since The Bridges of Madison County has a love story been more forbidden and compelling. Bea Franco and Jack Kerouac's 15 day tryst, dependent on tequila, compromise and hope, has been held captive, nearly forgotten, for over 60 years. Only now are we fortunate to have a writer as gifted as TZ Hernandez tell it with such corazón and poignancy.”—Michele Serros, author of How to be a Chicana Role Model
"Tim Hernandez's groundbreaking book has shed new light on the near-mythical ‘Mexican Girl’ of Jack Kerouac's 1957 novel, On the Road. The story of the real-life Mexican Girl, Bea Franco, Mañana Means Heaven is by turns tender and rewarding, offering a dazzling offshoot from the oft-explored road story that is Kerouac's."—Paul Maher Jr., author of Jack Kerouac’s American Journey