Man Out: Men on the Sidelines of American Life (Hardcover) 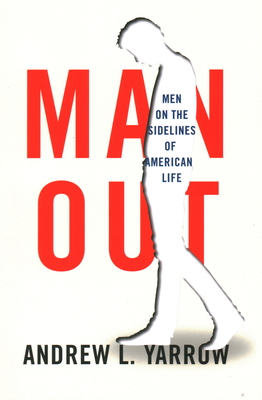 Man Out: Men on the Sidelines of American Life (Hardcover)

Man Out describes the millions of men on the sidelines of life in the United States. Many of them have been pushed out of the mainstream because of an economy and society where the odds are stacked against them; others have chosen to be on the outskirts of twenty-first-century America. These men are disconnected from work, personal relationships, family and children, and civic and community life. They may be angry at government, employers, women, and "the system" in general--and millions of them have done time in prison and have cast aside many social norms.

Sadly, too many of these men are unsure what it means to be a man in contemporary society. Wives or partners reject them; children are estranged from them; and family, friends, and neighbors are embarrassed by them. Many have disappeared into a netherworld of drugs, alcohol, poor health, loneliness, misogyny, economic insecurity, online gaming, pornography, other off-the-grid corners of the internet, and a fantasy world of starting their own business or even writing the Great American novel.

Most of the men described in this book are poorly educated, with low incomes and often with very few prospects for rewarding employment. They are also disproportionately found among millennials, those over 50, and African American men. Increasingly, however, these lost men are discovered even in tony suburbs and throughout the nation. It is a myth that men on the outer corners of society are only lower-middle-class white men dislocated by technology and globalization.

Unlike those who primarily blame an unjust economy, government policies, or a culture sanctioning "laziness," Man Out explores the complex interplay between economics and culture. It rejects the politically charged dichotomy of seeing such men as either victims or culprits. These men are hurting, and in turn they are hurting families and hurting America. It is essential to address their problems.

Man Out draws on a wide range of data and existing research as well as interviews with several hundred men, women, and a wide variety of economists and other social scientists, social service providers and physicians, and with employers, through a national online survey and in-depth fieldwork in several communities.

Andrew L. Yarrow, a senior fellow at the Progressive Policy Institute, has been a New York Times reporter, a Labor Department speechwriter, and a U.S. history professor at American University, and has been affiliated with the Brookings Institution and the Aspen Institute. He has published four previous books, writes frequently for national media, and also has worked or consulted for Public Agenda, Oxfam America, the Export-Import Bank, the World Bank, UNICEF, the U.S. Department of Education, and the Kettering Foundation.