Leveling the Playing Field: The Story of the Syracuse 8 (Sports and Entertainment) (Hardcover) 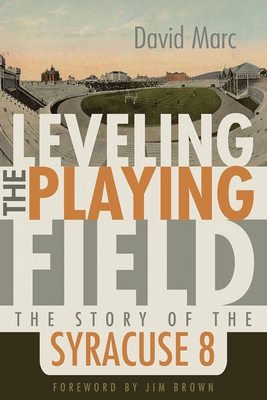 Leveling the Playing Field: The Story of the Syracuse 8 (Sports and Entertainment) (Hardcover)

Leveling the Playing Field tells the story of the African American members of the 1969-70 Syracuse University football team who petitioned for racial equality on their team. The petition had four demands: access to the same academic tutoring made available to their white teammates; better medical care for all team members; starting assignments based on merit rather than race; and a discernible effort to racially integrate the coaching staff, which had been all white since 1898.

The players' charges of racial disparity were fiercely contested by many of the white players on the team, and the debate spilled into the newspapers and drew protests from around the country. Mistakenly called the "Syracuse 8" by media reports in the 1970s, the nine players who signed the petition did not receive a response allowing or even acknowledging their demands. They boycotted the spring 1970 practice, and Coach Ben Schwartzwalder, a deeply beloved figure on campus and a Hall of Fame football coach nearing retirement, banned seven of the players from the team. As tensions escalated, white players staged a day-long walkout in support of the coaching staff, and an enhanced police presence was required at home games. Extensive interviews with each player offer a firsthand account of their decision to stand their ground while knowing it would jeopardize their professional football career. They discuss with candor the ways in which the boycott profoundly changed the course of their lives. In Leveling the Playing Field, Marc chronicles this contentious moment in Syracuse University's history and tells the story through the eyes of the players who demanded change for themselves and for those who would follow them.
David Marc is the author of numerous books, including Bonfire of the Humanities: Television, Subliteracy, and Long-Term Memory Loss.