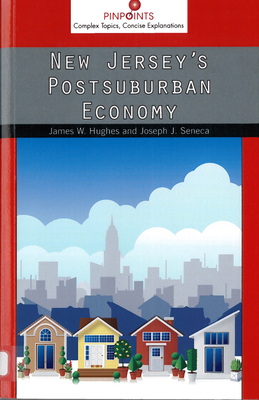 
Available to Order - Usually Arrives in Our Store in 4 to 7 Days
New Jersey has a long history of adapting to a changing economic climate. From its colonial origins to the present day, New Jersey's economy has continuously and successfully confronted the challenges and uncertainties of technological and demographic change, placing the state at the forefront of each national and global economic era. Based on James W. Hughes and Joseph J. Seneca’s nearly three-decade-long Rutgers Regional Report series, New Jersey’s Postsuburban Economy presents the issues confronting the state and brings to the forefront ideas for meeting these challenges.

From the rural agricultural and natural resource based economy and lifestyle of the seventeenth century to today’s postindustrial, suburban-dominated, automobile-dependent economy, the economic drivers which were considered to be an asset are now viewed by many to be the state’s greatest disadvantage. On the brink of yet another transformation, this one driven by a new technology and an internet based global economy, New Jersey will have to adapt itself yet again—this time to a postsuburban digital economy.
Hughes and Seneca describe the forces that are now propelling the state into yet another economic era. They do this in the context of historical economic transformations of New Jersey, setting out the technological, demographic, and transportation shifts that defined and drove them..
JAMES W. HUGHES is Distinguished Professor and dean,  Edward J. Bloustein School of Planning and Public Policy at Rutgers University, and director of the Rutgers Regional Report.

JOSEPH J. SENECA, formerly chief academic officer at Rutgers University and chair of the New Jersey Council of Economic Advisors, is Distinguished University Professor of economics at Rutgers. He is coauthor of America’s Demographic Tapestry (Rutgers University Press) with James W. Hughes.
"A view of New Jersey’s past, present and future economy by two of the states most respected scholars. Should be a must read for anybody hoping to shape future economic policy."
— Thomas H. Kean

"If you are interested in New Jersey's economy, its history, its recent and present condition, and knowledgeable projections as to where it's going, Jim Hughes and Joe Seneca should be your go-to guys. Their clear and easy-to-read writing style makes economics almost enjoyable."
— James J. Florio