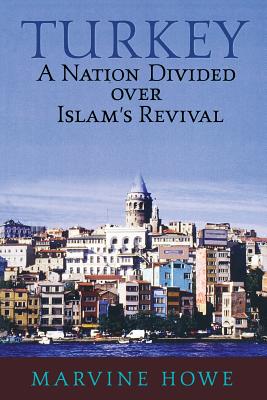 By Marvine Howe
$17.99
Available to Order - Usually Arrives in Our Store in 4 to 7 Days

The secular Republic of Turkey, which has gone further towards Westernization than any other Muslim country, has been caught up in the Islamic revival sweeping the world from Morocco to the Philippines. Three-quarters of a century after Mustafa Kemal Ataturk abolished the trappings of the Islamic state and replaced them with Western institutions, Turkey has become dangerously polarized. Ataturk's disciples see his revolution under threat and are engaged in a new crusade against the spread of political Islam. On the other hand, a reinvigorated Islamic movement chafes at official restrictions on Islamic practices and is seeking ways to gain political power.Turkey Today is about the Islamic surge in today's Turkey, the only Muslim country with one foot in Europe and an active member of the Western Alliance. It is about Ataturk's legacy, its successes and failures. It is also a personal view of the multi-dimensional nature of Islam in Turkey… as a political, moral, spiritual force.The New York Times bureau chief in Ankara before and after the 1980 military coup, Marvine Howe returns to Turkey to give an in-depth account of the Islamic revival in that rigidly secular country. She discusses the questions on many peoples minds: Why has political Islam reemerged in Turkey today? How does the observance of Islam in Turkey differ from that of other Muslims in the region? Does the Islamic movement pose a threat to the secular state and its relations with the West? What are the chances for an Islamic-secular dialogue and accommodation?Here is a close-up view of some of the many faces of Islam in Turkey: the fundamentalist who would sacrifice higher education for a headscarf, radical cult leaders who prey on youths, the Islamist author who openly seeks to return to Sharia (Islamic Law), ordinary students in the controversial Imam Hatip schools, a leading Islamic reformist who would be satisfied with the American Bill of Rights.Here too, you will meet the Kemalists imbued with the Ataturk mystique. There is the judge who firmly believes that all sectors of the Turkish society have been infiltrated by the Islamic movement. Above all many women are obsessed with the Iranian revolution and the possibility it might happen in Turkey. Their close allies are the military, who promoted religion against Communism in the 1980s, and a decade later launched a virulent campaign against what they perceive to be radical Islamic activities.This reportage-monograph also focuses on other aspects of contemporary Turkey: the Kurdish imbroglio, the mood of the minorities, the Islamization of the arts, the economic boom in the provinces, the reappraisal of Turkish foreign policy.Turkey Today is a lively engaging portrait of this richly diverse society, a fair and even-handed treatment of all sides.

Marvine Howe is a former bureau chief for the New York Times in Turkey and Greece. She is currently a freelance writer and lives in Lexington, Virginia.