Victoria: The Queen: An Intimate Biography of the Woman Who Ruled an Empire (Paperback) 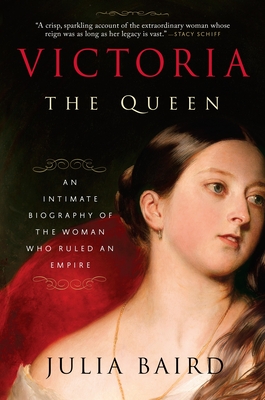 Victoria: The Queen: An Intimate Biography of the Woman Who Ruled an Empire (Paperback)

“Only 18 when she assumed the throne, Victoria ruled a vast empire for more than 60 years. In this biography Baird reveals a woman who so dominated the world that an entire epoch was named for her. Her nine children and their children inhabited most of the thrones of Europe until the upheaval of World War I, and her expansionist policies enabled Great Britain to rule over a quarter of the entire world. Baird also portrays a passionate and vibrant woman who struggled to assert herself in a time and place that was dismissive of the female sex. This enthralling biography is a welcome addition and nuanced look at a dynamic queen.”
— Barbara Hoagland (E), The King's English, Salt Lake City, UT

The true story for fans of the PBS Masterpiece series Victoria, this page-turning biography reveals the real woman behind the myth: a bold, glamorous, unbreakable queen—a Victoria for our times. Drawing on previously unpublished papers, this stunning portrait is a story of love and heartbreak, of devotion and grief, of strength and resilience.

When Victoria was born, in 1819, the world was a very different place. Revolution would threaten many of Europe’s monarchies in the coming decades. In Britain, a generation of royals had indulged their whims at the public’s expense, and republican sentiment was growing. The Industrial Revolution was transforming the landscape, and the British Empire was commanding ever larger tracts of the globe. In a world where women were often powerless, during a century roiling with change, Victoria went on to rule the most powerful country on earth with a decisive hand.

Fifth in line to the throne at the time of her birth, Victoria was an ordinary woman thrust into an extraordinary role. As a girl, she defied her mother’s meddling and an adviser’s bullying, forging an iron will of her own. As a teenage queen, she eagerly grasped the crown and relished the freedom it brought her. At twenty, she fell passionately in love with Prince Albert of Saxe-Coburg and Gotha, eventually giving birth to nine children. She loved sex and delighted in power. She was outspoken with her ministers, overstepping conventional boundaries and asserting her opinions. After the death of her adored Albert, she began a controversial, intimate relationship with her servant John Brown. She survived eight assassination attempts over the course of her lifetime. And as science, technology, and democracy were dramatically reshaping the world, Victoria was a symbol of steadfastness and security—queen of a quarter of the world’s population at the height of the British Empire’s reach.

Drawing on sources that include fresh revelations about Victoria’s relationship with John Brown, Julia Baird brings vividly to life the fascinating story of a woman who struggled with so many of the things we do today: balancing work and family, raising children, navigating marital strife, losing parents, combating anxiety and self-doubt, finding an identity, searching for meaning.
Julia Baird is a journalist, broadcaster, and author based in Sydney, Australia. She is a columnist for the International New York Times and host of The Drum on ABC TV (Australia). Her writing has appeared in Newsweek, The New York Times, The Philadelphia Inquirer, The Guardian, The Washington Post, The Sydney Morning Herald, The Monthly, and Harper’s Bazaar. She has a Ph.D. in history from the University of Sydney. In 2005, Baird was a fellow at the Joan Shorenstein Center on Media, Politics and Public Policy at Harvard University.

“Victoria the Queen, Julia Baird’s exquisitely wrought and meticulously researched biography, brushes the dusty myth off this extraordinary monarch. Right out of the gate, the book thrums with authority as Baird builds her portrayal of Victoria. Overturning stereotypes, she rips this queen down to the studs and creates her anew. . . . Baird’s Victoria isn’t the woman we expect to meet. Her queen is a pure iconoclast: emotional, demonstrative, sexual and driven. . . . Baird writes in the round. She constructs a dynamic historical figure, then spins out a spherical world of elegant reference, anchoring the narrative in specific detail and pinning down complex swaths of history that, in less capable hands, would simply blow away.”—The New York Times Book Review (Editor’s Choice)

“In this in-depth look at a feminist before her time, you’ll balk at, cheer on, and mourn the obstacles in the life of the teen queen who grew into her throne.”—Marie Claire

“Exhilarating . . . [A] frisky, adventurous new biography . . . This book shows how Victoria’s girlish naughtiness turned into a regal, willful, complex nature that other biographers have tended to simplify. . . . [Julia] Baird brings a strong feminist awareness to the ways in which Victoria’s letters, edited by two men, have been censored to excise the full range of her personality, and also to the subordinate role any wife was expected to assume when Victoria was a young bride.”—Janet Maslin, The New York Times

“In Baird’s deft portrayal, Victoria lives, breathes, and struts before us in all her complexity. . . . On a geopolitical level, Baird’s sweeping historical portrait also illuminates just how interconnected the European royal families were during this time. . . . Historical astuteness aside, the pages gallop along enhanced by titillating morsels of info.”—Esquire

“A vivid portrait of one of England’s longest-reigning monarchs.”—Entertainment Weekly

“[A] success from start to finish . . . [Baird’s] Victoria is a vivid, visceral creature. . . . Baird also does a lively, excellent job of detailing Victoria’s later years. . . . [She] paints a touching picture of those final decades, during which Victoria strove to feel alive despite the fact that the great love of her life was dead.”—The Christian Science Monitor

“Like the best biographers, Baird writes like a novelist, and her book is crammed with irresistible detail and description.”—The Seattle Times

“Baird thoroughly and engagingly strives to restore a truer perspective of both woman and sovereign in her fine work, Victoria: The Queen. . . . Baird’s biography successfully presents the queen in all of her roles, some of which were contradictory, to show how Victoria did indeed have a mind of her own—despite her husband and prime ministers—and lived and ruled the way she thought best.”—Chicago Tribune