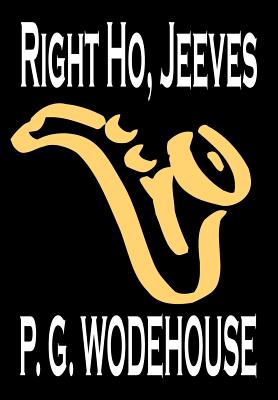 By P. G. Wodehouse
Email or call for price. Handling fee may apply.
Special Request - May Not Be Available

The second full-length novel featuring the popular characters Jeeves and Bertie Wooster, after Thank You, Jeeves. It also features a host of other recurring Wodehouse characters (some of whom it introduces) and is mostly set at Brinkley Court, the home of Bertie's Aunt Dahlia.

I would urge you, however, to get hold of the complete novel Right Ho, Jeeves, where you will encounter it fully in context and find that it leaps even more magnificently to life. I don't know if you have had the same experience, but the snag I always come up against when I'm telling a story is this dashed difficult problem of where to begin it. It's a thing you don't want to go wrong over, because one false step and you're sunk. I mean, if you fool about too long at the start, trying to establish atmosphere, as they call it, and all that sort of rot, you fail to grip and the customers walk out on you. Get off the mark, on the other hand, like a scalded cat, and your public is at a loss. It simply raises its eyebrows, and can't make out what you're talking about. And in opening my report of the complex case of Gussie Fink-Nottle, Madeline Bassett, my Cousin Angela, my Aunt Dahlia, my Uncle Thomas, young Tuppy Glossop and the cook, Anatole, with the above spot of dialogue, I see that I have made the second of these two floaters. I shall have to hark back a bit. And taking it for all in all and weighing this against that, I suppose the affair may be said to have had its inception, if inception is the word I want, with that visit of mine to Cannes. If I hadn't gone to Cannes, I shouldn't have met the Bassett or bought that white mess jacket, and Angela wouldn't have met her shark, and Aunt Dahlia wouldn't have played baccarat. Yes, most decidedly, Cannes was the point d'appui. . . .