Out of Our Heads: Why You Are Not Your Brain, and Other Lessons from the Biology of Consciousness (Hardcover) 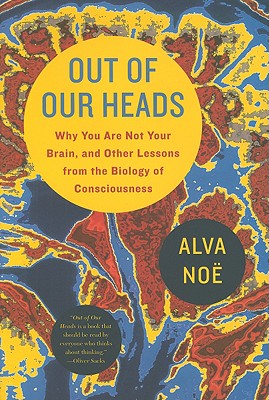 Out of Our Heads: Why You Are Not Your Brain, and Other Lessons from the Biology of Consciousness (Hardcover)

Alva Noë is one of a new breed—part philosopher, part cognitive scientist, part neuroscientist—who are radically altering the study of consciousness by asking difficult questions and pointing out obvious flaws in the current science. In Out of Our Heads, he restates and reexamines the problem of consciousness, and then proposes a startling solution: Do away with the two hundred-year-old paradigm that places consciousness within the confines of the brain. Our culture is obsessed with the brain—how it perceives; how it remembers; how it determines our intelligence, our morality, our likes and our dislikes. It’s widely believed that consciousness itself, that Holy Grail of science and philosophy, will soon be given a neural explanation. And yet, after decades of research, only one proposition about how the brain makes us conscious—how it gives rise to sensation, feeling, and subjectivity—has emerged unchallenged: We don’t have a clue. In this inventive work, Noë suggests that rather than being something that happens inside us, consciousness is something we do. Debunking an outmoded philosophy that holds the scientific study of consciousness captive, Out of Our Heads is a fresh attempt at understanding our minds and how we interact with the world around us.

Alva Noe is a professor of philosophy at the University of California, Berkeley, where he is also a member of the Institute of Cognitive and Brain Sciences. His previous book, "Action in Perception," was published in 2004.

“Provocative and lucid . . . Certainly, many of the scientists cited by Noë would disagree with his interpretations, but that’s part of what makes this book so important: It’s an audacious retelling of the standard story, an exploration of the mind that questions some of our most cherished assumptions about what the mind is.” —Jonah Lehrer, San Francisco Chronicle “Noë is an alluring writer.” —Ruth Levy Guyer, The Washington Post “Noë’s conversational style is gentle, attentive and easygoing. But, in true philosopher fashion, he also picks his words deliberately, as if stepping off the path of right thinking would result in some tragic plummet into the abyss of illogic.” —Gordy Slack, Salon “I found Out of Our Heads to be a refreshingly clear, well-written, and satisfyingly slim book that reveals serious limitations in the mainstream academic approach to studying the nature of consciousness.” —Dean Radin, Shift “As a neurologist, confronted every day by questions of mind, self, consciousness, and their basis, I find Alva Noë’s concepts—that consciousness is an organismic and not just a cerebral quality, that it is embodied in actions and not just isolated bits of brain—both astounding and convincing. Out of Our Heads is a book that should be read by everyone who thinks about thinking.” —Oliver Sacks, Professor of Neurology and Psychiatry, Columbia University Medical Center “A provocative and insightful book that will force experts and students alike to reconsider their grasp of current orthodoxy. Out of Our Heads is a vivid, clear, and very knowledgeable critique of some of the main ideas in cognitive science, and those of us who disagree with some of its main conclusions have our work cut out for us.” —Daniel C. Dennett, Professor of Philosophy, Tufts University “This book blows a breath of fresh air into the debates about consciousness and the brain. You are not your brain; you are your body, brain, and world dynamically intertwined. Consciousness is not a solo performance by the brain; it’s a partner dance our living bodies enact in concert with the world. If you think the brain is the beginning and end of the story about consciousness, you need to get out of your head and read this book!” —Evan Thompson, Professor of Philosophy, University of Toronto “As colorful and hard-hitting as its title suggests, Out of Our Heads is an important and provocative work that challenges some of the deepest assumptions guiding the contemporary scientific study of conscious experience.” —Andy Clark, Professor of Logic and Metaphysics, Edinburgh University “Alva Noë makes a powerful and persuasive case for the view that a several-centuries-old picture of the mind as an entity ‘inside the head’ has misled both lay and scientific thought about the nature of consciousness and, more broadly, the nature of the mind-world relation. Ranging over topics in philosophy, psychology, and neurology, the chapters of this book combine sophistication and availability to a general reader. His alternative to the misleading picture is nontrivial, and while his views are sure to be controversial, most of what he says is true, and all of it is original and important to think about.” —Hilary Putnam, Emeritus Professor of Philosophy, Harvard University “Readers interested in how science can intersect with and profit from philosophy will find much food for thought in Noë’s groundbreaking study.” —Publishers Weekly “Illuminating . . . An invaluable contribution to cognitive science and the branch of self-reflective philosophy extending back to Descartes’ famous maxim, ‘I think, therefore I am.’” —Carl Hays, Booklist