Hoboes: Bindlestiffs, Fruit Tramps, and the Harvesting of the West (Hardcover) 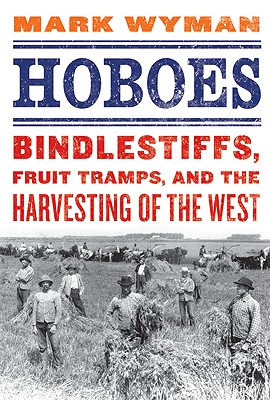 Hoboes: Bindlestiffs, Fruit Tramps, and the Harvesting of the West (Hardcover)

When the railroad stretched its steel rails across the American West in the 1870s, it opened up a vast expanse of territory with very few people but enormous agricultural potential: a second Western frontier, the garden West. Agriculture quickly followed the railroads, making way for Kansas wheat and Colorado sugar beets and Washington apples. With this new agriculture came an unavoidable need for harvest workers—for hands to pick the apples, cotton, oranges, and hops; to pull and top the sugar beets; to fill the trays with raisin grapes and apricots; to stack the wheat bundles in shocks to be pitched into the maw of the threshing machine. These were not the year-round hired hands but transients who would show up to harvest the crop and then leave when the work was finished.  Variously called bindlestiffs, fruit tramps, hoboes, and bums, these men—and women and children—were vital to the creation of the West and its economy. Amazingly, it is an aspect of Western history that has never been told. In Hoboes: Bindlestiffs, Fruit Tramps, and the Harvesting of the West, the award-winning historian Mark Wyman beautifully captures the lives of these workers. Exhaustively researched and highly original, this narrative history is a detailed, deeply sympathetic portrait of the lives of these hoboes, as well as a fresh look at the settling and development of the American West.

A distinguished professor of history, emeritus, at Illinois State University, Mark Wyman has written several books on immigration and the American West. He lives in Normal, Illinois, with his wife Eva.

“Vivid, accessible prose . . . Wyman colorfully describes the rough camaraderie among hobos riding the rails and sharing their scant food in outdoor ‘jungles,’ the only accommodations available to transients so distrusted by settled folks that any hobo venturing into a town was likely to be jailed as a vagrant. Later chapters stirringly cover the battles fought by the radical Industrial Workers of the World, the only group willing to represent migrant workers viewed by other labor unions as unskilled and impossible to organize.” —Wendy Smith, Los Angeles Times “Eye-opening, even for students and scholars familiar with the history of hoboes in agriculture from the end of the Civil War to the 1920s . . . Hoboes moves ahead with energy and clarity. There are wonderful anecdotes throughout.” —Jonah Raskin, San Francisco Chronicle “Mark Wyman has written the prehistory of Steinbeck’s Grapes of Wrath, Murrow’s Harvest of Shame, and Cesar Chavez’s La Causa. Hoboes presents a gripping alternative history of the development of the American West.” —Melvyn Dubofsky, author of We Shall Be All “This profoundly researched book is itself a rich harvest, bringing to life the forgotten workers of the field and forest in the days of riding the rails. In original and engaging fashion, Mark Wyman has mastered the epic of an America unable to do without migrant laborers but often morally unsure what to do with them, a story that goes on to this day.” —Ivan Doig, author of The Whistling Season “Mark Wyman has again written a first-rate history. For half a century, from the Great Plains to the Pacific, hoboes and other migrant workers of many races and ethnicities followed the railroads and struggled to build decent lives for themselves. Here’s their story, thoroughly researched and a great read.” —Walter Nugent, author of Into the West “A highly recommended and revisionist account of how the West was made by an army of seasonal farm workers. Their hard lives and vital contributions are fully described in a book rich in anecdote and important in argument.” —Donald Worster, author of Dust Bowl “Mark Wyman has written an important study that captures the presence of transient harvest workers across changing seasons and the varied landscapes of the agricultural West from 1870 to 1920. This is a work of impeccable scholarship and insightful analysis by one of the leading historians of the American West.” —Malcolm Rohrbough, author of Days of Gold “Mark Wyman, the dean of Western labor historians, tells with clarity and often poignancy the harrowing stories of transient workers in the American West in the late nineteenth and early twentieth centuries, demonstrating that the migrant farm worker of today is not a recent innovation but is embedded in the history of the West.” —Andrew Isenberg, author of Mining California “Dramatically enlarges our understanding of the role of migrant agricultural workers in the economic development of the American West.  Wyman illustrates that most facets of modern western agriculture have long been dependent upon such workers.  A must-read for any student of the American West.” —R. David Edmunds, Watson Professor of History, University of Texas at Dallas