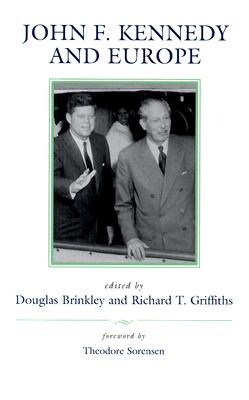 When John F. Kennedy was inaugurated as the thirty-fifth president of the United States in January 1961, the cold war was at its height. Although the Soviet Union's menace and reach were global and its best opportunities for expansion lay in the newer, poorer countries of the Third World, Kennedy believed that Europe represented the war's front line. In Eastern Europe, Soviet power was achieving its greatest and most brutal successes; in Western Europe, the United States and its traditional allies had mobilized NATO to discourage a Soviet-led invasion or nuclear attack; and in the heart of Europe, West Berlin presented the single most likely detonator for what Kennedy termed "mankind's final war." In this politically volatile climate, Kennedy gave top priority to Europe, recognizing that the continent, during his presidency, was the key to America's success, security, and survival in a dangerous world.

John F. Kennedy and Europe offers a sterling collection of essays by both participants in and scholars of United States policy toward Europe from 1961 to 1963. Included in the volume are contributions by British historian Alistair Horne, journalist John Newhouse, policymaker Walt W. Rostow, and arms control specialist Carl Kaysen. The essays treat such important topics as Kennedy's relationships with European leaders, his administration's Italian and Portuguese policies, the Limited Test-Ban Treaty of 1963, and the balance-of-payments crisis with Europe. Together, these essays prove to be an indispensable, balanced contribution to cold war historiography and a landmark event in the study of the dynamics of what is still called the Atlantic partnership.
Douglas Brinkley is director of the Eisenhower Center for American Studies and professor of history at the University of New Orleans. He is the author of several books, including Dean Acheson: The Cold War Years and The Unfinished Presidency: Jimmy Carter's Journey Beyond the White House. Richard T. Griffiths is professor of modern European history at Leiden University, The Netherlands, and editor of Socialist Parties and the Question of Europe in the 1950s. Theodore Sorensen served as special counsel to President John F. Kennedy and was his principal speechwriter. He is author of several books, including Decision-Making in the White House and Kennedy.