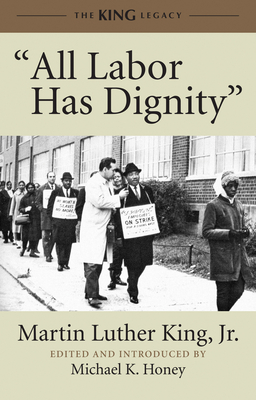 This is book number 5 in the King Legacy series.

An unprecedented and timely collection of Dr. King’s speeches on labor rights and economic justice

People forget that Dr. King was every bit as committed to economic justice as he was to ending racial segregation. He fought throughout his life to connect the labor and civil rights movements, envisioning them as twin pillars for social reform. As we struggle with massive unemployment, a staggering racial wealth gap, and the near collapse of a financial system that puts profits before people, King’s prophetic writings and speeches underscore his relevance for today. They help us imagine King anew: as a human rights leader whose commitment to unions and an end to poverty was a crucial part of his civil rights agenda.

Covering all the civil rights movement highlights—Montgomery, Albany, Birmingham, Selma, Chicago, and Memphis—award-winning historian Michael K. Honey introduces and traces King’s dream of economic equality. Gathered in one volume for the first time, the majority of these speeches will be new to most readers. The collection begins with King’s lectures to unions in the 1960s and includes his addresses during his Poor People’s Campaign, culminating with his momentous “Mountaintop” speech, delivered in support of striking black sanitation workers in Memphis. Unprecedented and timely, “All Labor Has Dignity” will more fully restore our understanding of King’s lasting vision of economic justice, bringing his demand for equality right into the present.

Dr. Martin Luther King, Jr. (1929-1968), Nobel Peace Prize laureate and architect of the nonviolent civil rights movement, was among the twentieth century's most influential figures. One of the greatest orators in U.S. history, King is the author of several books, including Stride Toward Freedom: The Montgomery Story, The Trumpet of Conscience, Why We Can't Wait, and Where Do We Go from Here: Chaos or Community? His speeches, sermons, and writings are inspirational and timeless. King was assassinated in Memphis, Tennessee, on April 4, 1968.

Michael K. Honey, a former Southern civil rights and civil liberties organizer, is professor of  labor ethnic and gender studies and American history, and the Haley Professor of Humanities, at the University of Washington-Tacoma. The author of three books on labor and civil rights history, including Going Down Jericho Road: The Memphis Strike, Martin Luther King's Last Campaign, he lives in Tacoma.

“King was always a champion for labor rights and economic justice, and this volume illustrates that dimension of his leadership. Preceding each carefully transcribed speech, a brief essay by Honey puts King’s words into context. …Highly recommended.”—Choice Magazine

“Michael Honey, a distinguished scholar of labor and African-American History, has done a great service by gathering Martin Luther King, Jr.’s speeches on labor, may of them previously unknown.  He brings to life the King who from the outset of his public career insisted that “the evil of economic injustice” must be combated along with racial inequality, and who saw the effort to eliminate poverty as a natural outgrowth of the civil rights struggle. This is a more complex King than we celebrate every January, forever frozen on the steps of the Lincoln Memorial delivering his “I Have a Dream Speech.”  King’s dream called for nothing less than a radical restructuring of American economic life.”—Eric Foner, DeWitt Clinton Professor of History, Columbia University

“Thanks to Michael Honey’s meticulous editing and the inclusion of rarely heard audio, we can finally grasp the depth of the Reverend Martin Luther King’s commitment to Americans as workers. Now, more than ever, his insights show us the way of transformation from consumers divided by race and ethnicity into an active, united citizenry.”—Nell Irvin Painter, author of The History of White People and Edwards Professor of American History, Emerita, Princeton University

“This is more than a compelling and unprecedented collection of speeches by Martin Luther King, Jr. Through thoughtful introductions to each and every speech, Honey sets the stage for the reader, proving without a doubt that Dr. King was among the greatest labor leaders of the 20th century and that his message continues to resonate powerfully in our age.”—Bill Fletcher, Jr., Editorial Board, BlackCommentator.com; co-founder, Center for Labor Renewal; Board Chairperson, International Labor Rights

“As this powerful and inspiring collection shows, Dr. King was a tireless champion of the working class. But “All Labor Has Dignity” is not just a testament to his rhetorical legacy—it is a call to action.”—Richard L. Trumka, president, AFL-CIO

“All Labor Has Dignity is an illuminating argument that King was concerned with much, much more than just the plight of black people. His public career may have started in that arena, but it ended with him as a champion for progressives around the globe.”—Pop Matters