Lieutenant Nun: Memoir of a Basque Transvestite in the New World (Paperback) 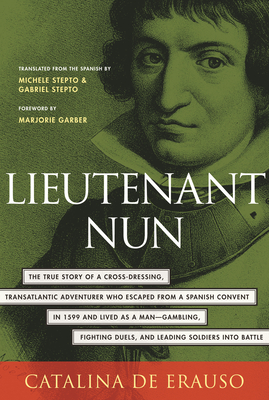 By Catalina De Erauso
$16.00
Available to Order - Usually Arrives in Our Store in 4 to 7 Days

When Catalina de Erauso's father sent her off for a life at a convent, she escaped dressed as a boy and lived the rest of her life as a man. He joined the Spanish Army, traveled to the New World where he served as a soldier in Peru and Chile, became a degenerate gambler, and even unknowingly dueled with his own brother. Then, he wrote his memoirs! This swashbuckling tale of adventure also demonstrates the flexibility of gender norms, even in a place like Early Modern Spain.

One of the earliest known autobiographies by a woman, this is the extraordinary tale of Catalina de Erauso, who in 1599 escaped from a Basque convent dressed as a man and went on to live one of the most wildly fantastic lives of any woman in history. A soldier in the Spanish army, she traveled to Peru and Chile, became a gambler, and even mistakenly killed her own brother in a duel. During her lifetime she emerged as the adored folkloric hero of the Spanish-speaking world. This delightful translation of Catalina's own work introduces a new audience to her audacious escapades.

Catalina de Erauso was born in Spain in either 1585 or 1592, according to disputed records, and died in 1650. Raised and educated in a convent, de Erauso refused to conform to the strict nature of the environment and, disguising herself in men’s clothing, escaped in 1600. As a fugitive, she then traveled to various countries and joined the Chilean military, climbing the ranks. Her story is told in Lieutenant Nun: Memoirs of a Basque Transvestite, which was originally wrote or dictated, and eventually published, in Paris in 1829.

"[Catalina de Erauso] dared to steal the quest narrative from the roving men of her time and, miraculously, survived to tell the tale. An essential work for recovering the roots of women's autobiography and women's remaking of identity through encounters with otherness, not only in society but in the self." -Ruth Behar, author of The Vulnerable Observer