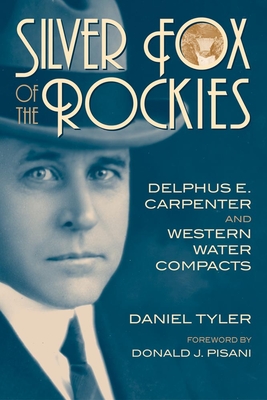 Delphus E. Carpenter (1877-1951) was Colorado's commissioner of interstate streams during a time when water rights were a legal battleground for western states. A complex, unassuming man as rare and cunning in politics and law as the elusive silver fox of the Rocky Mountain West, Carpenter boldly relied on negotiation instead of endless litigation to forge agreements among states first, before federal intervention. In Silver Fox of the Rockies, Daniel Tyler tells Carpenter's story and that of the great interstate water compacts he helped create. Those compacts, produced in the early twentieth century, have guided not only agricultural use but urban growth and development throughout much of the American West to this day.

In Carpenter's time, most western states relied on the doctrine of prior appropriation--first in time, first in right--which granted exclusive use of resources to those who claimed them first, regardless of common needs. Carpenter feared that population growth and rapid agricultural development in states sharing the same river basins would rob Colorado of its right to a fair share of water. To avoid that eventuality, Carpenter invoked the compact clause of the U.S. Constitution, a clause previously used to settle boundary disputes, and applied it to interstate water rights. The result was a mechanism by which complex issues involving interstate water rights could be settled through negotiation without litigating them before the U.S. Supreme Court. Carpenter believed in the preservation of states rights in order to preserve the constitutionally mandated balance between state and federal authority.

Today, water remains critically important to the American West, and the great interstate water compacts Carpenter helped engineer constitute his most enduring legacy. Of particular significance is the Colorado River Compact of 1922, without which Hoover Dam could never have been built.