The Hunger Angel: A Novel (Hardcover) 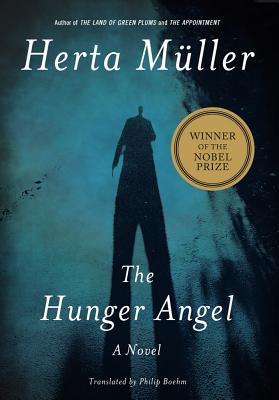 By Herta Müller, Philip Boehm (Translated by)
Please email or write store for pricing and availability information.
Out of Print

A masterful new novel from the winner of the 2009 Nobel Prize, hailed for depicting the "landscape of the dispossessed" with "the concentration of poetry and the frankness of prose" (Nobel Prize Committee)

It was an icy morning in January 1945 when the patrol came for seventeen-year-old Leo Auberg to deport him to a camp in the Soviet Union. Leo would spend the next five years in a coke processing plant, shoveling coal, lugging bricks, mixing mortar, and battling the relentless calculus of hunger that governed the labor colony: one shovel load of coal is worth one gram of bread.

In her new novel, Nobel laureate Herta Müller calls upon her unique combination of poetic intensity and dispassionate precision to conjure the distorted world of the labor camp in all its physical and moral absurdity. She has given Leo the language to express the inexpressible, as hunger sharpens his senses into an acuity that is both hallucinatory and profound. In scene after disorienting scene, the most ordinary objects accrue tender poignancy as they acquire new purpose—a gramophone box serves as a suitcase, a handkerchief becomes a talisman, an enormous piece of casing pipe functions as a lovers' trysting place. The heart is reduced to a pump, the breath mechanized to the rhythm of a swinging shovel, and coal, sand, and snow have a will of their own. Hunger becomes an insatiable angel who haunts the camp, but also a bare-knuckled sparring partner, delivering blows that keep Leo feeling the rawest connection to life.

Müller has distilled Leo's struggle into words of breathtaking intensity that take us on a journey far beyond the Gulag and into the depths of one man's soul.

Herta Müller is the winner of the 2009 Nobel Prize in Literature, as well as the International IMPAC Dublin Literary Award and the European Literature Prize. She is the author of, among other books, The Hunger Angel and The Land of Green Plums. Born in Romania in 1953, Müller lost her job as a teacher and suffered repeated threats after refusing to cooperate with Ceausescu's secret police. She succeeded in emigrating in 1987 and now lives in Berlin.

“This is not just a good novel, it is a great one… Müller is through and through a stylist. Her novel is written in a taut idiomatic German, which breaks into paragraphs of wrenching, Rilkean lyricism...A masterpiece.” —Financial Times

“Wry and poetic, and Müller's evocative language makes the abstract concrete as her narrator's sanity is stretched...Boehm's translation preserves the integrity of Müller's gorgeous prose, and Leo's despondent reveries are at once tragic and engrossing.” —Publishers Weekly (Starred Review)

“The stunning, exhilarating, heartbreaking culmination of Muller's work as a novelist...A 300-page prose poem of resistance to totalitarian repression, the book is a haunting paean to the human angel--the inventive, imaginative, invincible force that transcends suffering and absement, that defies depersonalization and deprivation to survive, and even thrive.” —The Wichita Eagle

“A work of rare force, a feat of sustained and overpowering poetry…Muller has the ability to distil concrete objects into language of the greatest intensity and to sear these objects on to the reader's mind.” —Times Literary Supplement

“A taut and brilliant book.” —Chicago Tribune on The Appointment

“A brooding, fog-shrouded allegory of life under the long oppression of the regime of Nicolae Ceausescu.” —The New York Times on The Appointment

“Müller scatters narrative bombshells across a field of dreams.” —San Francisco Chronicle on The Appointment