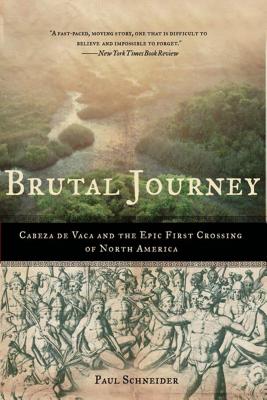 "Schneider's thorough research and vivid writing create a fast-paced, moving story, one that is difficult to believe and impossible to forget."
—The New York Times Book Review

A gripping survival epic, Brutal Journey tells the story of an army of would-be conquerors, bound for glory, who landed in Florida in 1528. But only four of the four hundred would survive: eight years and some five thousand miles later, three Spaniards and a black Moroccan wandered out of the wilderness to the north of the Rio Grande and into Cortes's gold-drenched Mexico. The survivors of the Narváez expedition brought nothing back other than their story, but what a tale it was. They had become killers and cannibals, torturers and torture victims, slavers and enslaved. They became faith healers, arms dealers, canoe thieves, spider eaters. They became, in other words, whatever it took to stay alive.

Paul Schneider is the acclaimed author of Bonnie and Clyde, Brutal Journey, The Enduring Shore, and The Adirondacks, a New York Times Book Review Notable Book. He and his family live in West Tisbury, Massachusetts.

“Brutal Journey is a wonderfully rich account of an incredible cross-country journey of survival. Paul Schneider's beautifully crafted book takes us to another time in another world, a place of native American shamans, Spanish conquistadors, and unbelievable determination. Best of all, it really happened.” —Jerald T. Milanich, Ph.D., archaeologist at the Florida Museum of Natural History and author of Florida Indians from Ancient Times to the Present