In the Kingdom of Ice: The Grand and Terrible Polar Voyage of the USS Jeannette (Large Print / Paperback) 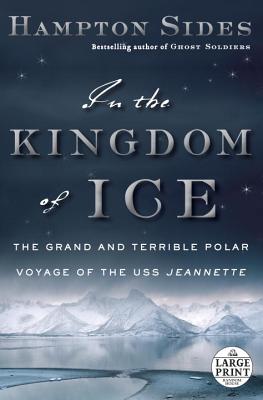 By Hampton Sides
Please email or write store for pricing and availability information.
Hard to Find

“Sides tells more than a fateful story of exploration, he brings to life an entire era of discovery and the passions that drove it. We meet a wild newspaper magnate who, in addition to racing carriages at midnight in the nude, exiled himself to France after drunkenly urinating in his then-fiancee's grand piano; an obsessive German cartographer who staunchly believed in a warm, open polar sea at the North Pole; and a strong-willed captain who fell madly in love with the impossible, glaciered grandeur of Earth above the 80th parallel. The meeting of these three eccentric minds led to the voyage of the USS Jeanette, and Sides tells the ship's tragic story well in cinematic prose with a keen sense of his characters and their changing world.”
— Michael Wallenfels, University Book Store, Seattle, WA

James Gordon Bennett, the eccentric and stupendously wealthy owner of The New York Herald, had recently captured the world's attention by dispatching Stanley to Africa to find Dr. Livingstone. Now he was keen to re-create that sensation on an even more epic scale. So he funded an official U.S. naval expedition to reach the Pole, choosing as its captain a young officer named George Washington De Long, who had gained fame for a rescue operation off the coast of Greenland. De Long led a team of 32 men deep into uncharted Arctic waters, carrying the aspirations of a young country burning to become a world power. On July 8, 1879, the USS Jeannette set sail from San Francisco to cheering crowds in the grip of "Arctic Fever."

The ship sailed into uncharted seas, but soon was trapped in pack ice. Two years into the harrowing voyage, the hull was breached. Amid the rush of water and the shrieks of breaking wooden boards, the crew abandoned the ship. Less than an hour later, the Jeannette sank to the bottom,and the men found themselves marooned a thousand miles north of Siberia with only the barest supplies. Thus began their long march across the endless ice—a frozen hell in the most lonesome corner of the world. Facing everything from snow blindness and polar bears to ferocious storms and frosty labyrinths, the expedition battled madness and starvation as they desperately strove for survival.

With twists and turns worthy of a thriller, In The Kingdom of Ice is a spellbinding tale of heroism and determination in the most unforgiving territory on Earth.

HAMPTON SIDES is an award-winning editor of Outside and the author of the bestselling histories Hellhound on his Trail, Blood and Thunder and Ghost Soldiers.

"Enthralling… In the Kingdom of Ice is a brilliant explosion of narrative non-fiction: detailed, moving, harrowing, as gripping as any well-paced thriller but a lot more interesting because it is also true… Too often American heroism is presented at one-dimensional success against the odds… This is a much more subtle and rewarding book, an account of magnificent disaster, of courage devoted to attempting something that could not be done."
--The Times of London


“As our knowledge of the world increases, it must be difficult for audacious explorers to find terra incognita to match their passion. Surely the same frustration holds true for writers in that worthy genre, exploration literature: Haven’t all great stories been told? Never underestimate the ingenuity of a first-rate author. Hampton Sides’s In the Kingdom of Ice: The Grand and Terrible Polar Voyage of the USS Jeannette, which recounts the astonishing tribulations of a group of seafarers determined to be the first men to reach and reconnoiter the North Pole, is a splendid book in every way… It would be malicious to ruin the suspense about the fate of the Jeannette’s crew… The book is a marvelous nonfiction thriller.”
--The Wall Street Journal


"Compelling....Sides spins a propulsive narrative from obscure documents, journals and his own firsthand visits to the Arctic regions visited by the Jeannette and its crew. In the Kingdom of Ice makes for harrowing reading as it recounts the grim aspects of the explorers' battle for survival: illness, crippling frostbite, snow-blindness and the prospect of starvation. As grisly as the details are, you keep turning pages to find out how DeLong and his men pull themselves past each setback — even though there's always another one looming ahead."
--USA Today


“[Sides] brings vividness to In the Kingdom of Ice, and in the tragedy of the Jeannette he’s found a story that epitomizes both the heroism and the ghastly expense of life that characterized the entire Arctic enterprise…With an eye for the telling detail, he sketches the crew members as individuals…The bare facts of what happened to the Jeannette’s crew are easily Googleable, but if you don’t already know the story, In the Kingdom of Ice reads like a first-class epic thriller. De Long and his companions became explorers of not only unknown geographical territory but also extremes of suffering and despair. In his stoic endurance of disappointment and pain, De Long rivals Louis Zamperini, the hero of Laura Hillenbrand’s Unbroken…”
--Lev Grossman, Time Magazine


“First-rate polar history and adventure narrative...wonderfully evocative.... Sides vividly recounts the horrors [of the voyage]. In the Kingdom of Ice is a harrowing story, well told.
--The New York Times Book Review


“Unforgettable…a pulse-racing epic of endurance set against an exceedingly bizarre Arctic backdrop…[Sides’] descriptions of the physical challenges the men face and the eerie landscape that surrounds them are masterful. As De Long and his crew attempt to save themselves, the story grows in suspense and psychological complexity…More strange and fantastic turns follow, involving uncharted and uninhabited lands, and it pains me that I cannot describe them without spoiling the pleasure of those who have not yet read In the Kingdom of Ice. Sides’ book is a masterful work of history and storytelling.”
--The Los Angeles Times


“America’s own brush with epic polar tragedy, the subject of Hampton Sides’ phenomenally gripping new book, is a less well-known affair…What ensued — a struggle to survive and a nearly 1,000-mile trek across the Arctic Ocean and into the vastness of Siberia — stands as one of the most perilous journeys ever. Sides works story-telling magic as he evokes the pathos and suffering of what unfolded: De Long and his crew endured hardships that boggle the mind. But there is also beauty here… [Sides] writes superbly on the geography of Siberia and the Arctic, and the abundant bird and animal life the explorers encountered on their travels, which took them across ice, storm-tossed seas, treacherous tundra, rocky seacoasts, and volcanic islands.”
--The Boston Globe

"A dazzling page-turner.....”
--Nathaniel Philbrick, New York Times bestselling author of In the Heart of the Sea, Bunker Hill and Sea of Glory

“An astonishingly good story....”
--Candice Millard, New York Times bestselling author of The Destiny of the Republic  and The River of Doubt

"Hampton Sides is one of America’s most expansive and engaging storytellers, and he proves it again with the incredible saga of the USS Jeannette...."
--Scott Anderson, New York Times bestselling author of Lawrence in Arabia