Rise and Grind: Outperform, Outwork, and Outhustle Your Way to a More Successful and Rewarding Life (Paperback) 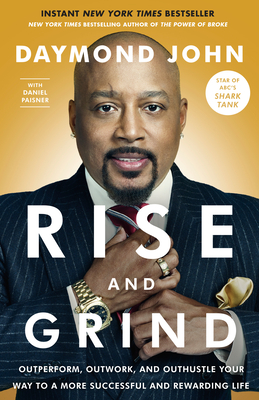 Rise and Grind: Outperform, Outwork, and Outhustle Your Way to a More Successful and Rewarding Life (Paperback)


On Our Shelves Now
New York Times bestselling author of The Power of Broke and "Shark" on ABC's hit show Shark Tank explores how grit, persistence, and good old-fashioned hard work are the backbone of every successful business and individual, and inspires readers to Rise & Grind their way the top.

Daymond John knows what it means to push yourself hard--and he also knows how spectacularly a killer work ethic can pay off. As a young man, he founded a modest line of clothing on a $40 budget by hand-sewing hats between his shifts at Red Lobster. Today, his brand FUBU has over $6 billion in sales.

Convenient though it might be to believe that you can shortcut your way to the top, says John, the truth is that if you want to get and stay ahead, you need to put in the work. You need to out-think, out-hustle, and out-perform everyone around you. You've got to rise and grind every day.

In the anticipated follow-up to the bestselling The Power of Broke, Daymond takes an up close look at the hard-charging routines and winning secrets of individuals who have risen to the challenges in their lives and grinded their way to the very tops of their fields. Along the way, he also reveals how grit and persistence both helped him overcome the obstacles he has faced in life and ultimately fueled his success.
DAYMOND JOHN is CEO and founder of FUBU, a celebrated global lifestyle brand with over $6 billion in sales. He is one of the country's most visible and respected entrepreneurs as one of the stars of ABC series Shark Tank. He is the author of the instant New York Times bestseller The Power of Broke, as well as the bestsellers Display of Power and The Brand Within. Daymond has received over 35 awards, including Brandweek Marketer of the Year and Ernst & Young's New York Entrepreneur of the Year Award. He is CEO of The Shark Group, a premiere consulting firm whose clients range from Fortune 500 companies to new media businesses to celebrities. President Obama appointed Daymond a Presidential Ambassador for Global Entrepreneurship, a position focused on promoting entrepreneurship around the world.