Thank You for Arguing, Third Edition: What Aristotle, Lincoln, and Homer Simpson Can Teach Us About the Art of Persuasion (Paperback) 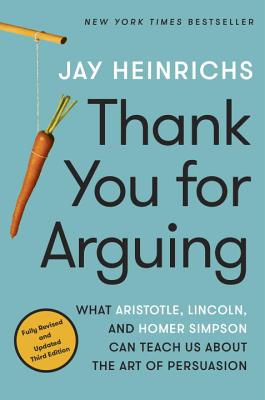 Thank You for Arguing, Third Edition: What Aristotle, Lincoln, and Homer Simpson Can Teach Us About the Art of Persuasion (Paperback)


Email or call for price. Handling fee may apply.
A master class in the art of persuasion, as taught by professors ranging from Bart Simpson to Winston Churchill, newly revised and updated.

The time-tested secrets taught in this book include Cicero's three-step strategy for moving an audience to action, and Honest Abe's Shameless Trick for lowering an audience's expectations. And it's also replete with contemporary techniques such as politicians' use of code language to appeal to specfic groups and an eye-opening assortment of persuasive tricks, including the Eddie Haskell Ploy, the Belushi Paradigm, Stalin's Timing Secret, and the Yoda Technique.

Whether you're an inveterate lover of language books or just want to win a lot more anger-free arguments on the page, at the podium, or over a beer, Thank You for Arguing is for you. Warm, witty, erudite, and truly enlightening, it not only teaches you how to recognize a paralipsis when you hear it, but also how to wield the weapons of persuasion the next time you really, really, want to get your own way.
JAY HEINRICHS spent twenty-six years as a writer, editor, and magazine-publishing executive before becoming a full-time advocate for the lost art of rhetoric. He now lectures widely on the subject, to audiences ranging from Ivy League students to NASA scientists to Southwest Airlines executives, and runs the language blog figarospeech.com