The Road to Little Dribbling: Adventures of an American in Britain (Paperback) 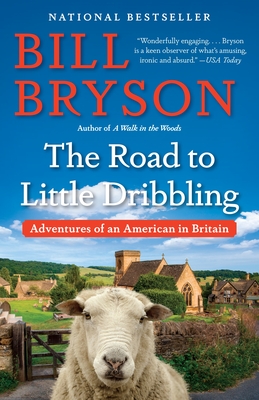 In 1995, Iowa native Bill Bryson took a motoring trip around Britain to explore that green and pleasant land. The uproarious book that resulted, Notes from a Small Island, is one of the most acute portrayals of the United Kingdom ever written. Two decades later, Bryson—now a British citizen—set out again to rediscover his adopted country. In these pages, he follows a straight line through the island—from Bognor Regis to Cape Wrath—and shows us every pub, stone village, and human foible along the way.

Whether he is dodging cow attacks in Torcross, getting lost in the H&M on Kensington High Street, or—more seriously—contemplating the future of the nation’s natural wonders in the face of aggressive development, Bryson guides us through the old and the new with vivid detail and laugh-out-loud humor. Irreverent, endearing, and always hilarious, The Road to Little Dribbling is filled with Bill Bryson’s deep knowledge and love of his chosen home.

Bill Bryson’s bestselling books include A Walk in the Woods (now a major motion picture starring Robert Redford and Nick Nolte), Notes from a Small Island, I’m a Stranger Here Myself, In a Sunburned Country, A Short History of Nearly Everything (which earned him the 2004 Aventis Prize), The Life and Times of the Thunderbolt Kid, At Home, and One Summer. He lives in England with his wife.

“Riveting. . . . Bryson is a master. . . . Almost as satisfying as being there yourself.” —Entertainment Weekly

“Bryson is a jovial companion and his typically funny self.” —Chicago Tribune

“Such a pleasure to once again travel the lanes and walking paths of Britain in the company of Bill Bryson! . . . It’s a rare book that will make me laugh out loud. This one did, over and over.” —Erik Larson, author of The Devil in the White City

“Genuinely hilarious. . . . At Bryson’s age, he can (and does) feel entitled not only to be done with such ugliness, but also to express his displeasure in ways most of us only dream of daring to do. And when he sees beauty and wonder in the world, he is rhapsodic—even evangelical.” —Minneapolis Star Tribune

“Bryson’s capacity for wonder at the beauty of his adopted homeland seems to have only grown with time.” —The Washington Post

“Charming. . . . Traveling with Bryson is fun because he never sugarcoats the hassles, the overpriced crummy food that runs abundant in touristy places—and the absolute delight of finding unexpected sights or happenstance meetings. . . . Here’s hoping Bryson remains cranky and curious for many years to come.” —The Christian Science Monitor

“Bryson is an entertaining travel companion. . . . He writes lyrically on the monuments at Stonehenge and Avebury. He is great on the joy of walking through the English countryside.” —The Wall Street Journal

“A gloriously funny read. . . . Bryson has no equal.” —Daily Express

“A funny and pleasant travelogue. Bryson can capture a place memorably with just a sharp phrase or two. . . . Wry and winning.” —NPR

“Fascinating. . . . A worthy successor and sequel to his classic Notes From A Small Island. . . . You could hardly ask for a better guide to Great Britain than Bill Bryson.” —The Miami Herald

“The history of a love affair, the very special relationship between Bryson and Britain. We remain lucky to have him.” —Financial Times

“Is it the funniest travel book I’ve read all year? Of course it is.” —Michael Kerr, The Daily Telegraph (London)

“Everybody loves Bill Bryson. . . . He’s clever, witty, entertaining, a great companion . . . his research is on show here, producing insight, wisdom and startling nuggets of information.” —The Independent on Sunday