How to Fly a Horse: The Secret History of Creation, Invention, and Discovery (Paperback) 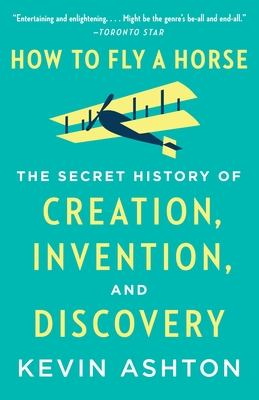 How to Fly a Horse: The Secret History of Creation, Invention, and Discovery (Paperback)

To create is human. Technology pioneer Kevin Ashton has experienced firsthand the all-consuming challenge of creating something new. Now, in a tour-de-force narrative twenty years in the making, Ashton demystifies the sacred act, leading us on a journey through humanity’s greatest creations to uncover the surprising truth behind who creates and how they do it. From the crystallographer’s laboratory where the secrets of DNA were first revealed by a long forgotten woman, to the Ohio bicycle shop where the Wright brothers set out to “fly a horse,” Ashton showcases the seemingly unremarkable individuals, gradual steps, multiple failures, and countless ordinary and usually uncredited acts that lead to our most astounding breakthroughs. Drawing on examples from Mozart to the Muppets, Archimedes to Apple, Kandinsky to a can of Coke, How to Fly a Horse is essential reading for would-be creators and innovators, and also a passionate and immensely rewarding exploration of how “new” comes to be.

Kevin Ashton led pioneering work on RFID (radio frequency identification) networks, for which he coined the term “the Internet of Things,” and cofounded the Auto-ID Center at MIT. His writing about innovation and technology has appeared in Quartz, Medium, The Atlantic, and The New York Times.

“One of the most creative books on creativity I have ever read, a genuinely inspiring journey through the worlds of art, science, business and culture that will forever change how you think about where new ideas come from.”
—William C. Taylor, cofounder and editor of Fast Company and author of Practically Radical

“[Ashton’s] is a democratic idea—a scientific version of the American dream. . . . [A]n approachable, thought-provoking book that encourages everyone to be the best they can be.”
—The Guardian (London)

“[How to Fly a Horse] takes on creation’s most pernicious clichés. . . . [Ashton] arrives at his theories by dint of his own hard work. . . . Being a genius is hard work. But that spark is in all of us.”
—The Washington Post

“An inspiring vision of creativity that’s littered with practical advice, and is a cracking read to boot.”
—BBC Focus

“[An] entertaining and inspiring meditation on the nature of creative innovation... Fans of Malcolm Gladwell and Stephen Levitt will enjoy Ashton’s hybrid nonfiction style, which builds a compelling cultural treatise from a coalescence of engaging anecdotes.”
—Booklist


“Ashton’s beautifully written exploration of creativity explodes so many myths and opens so many doors that readers, like me, will be left reeling with possibilities. We can all create, we can all innovate. Move over, Malcolm Gladwell; Ashton has done you one better.”
—Larry Downes, author of the New York Times bestseller Unleashing the Killer App and co-author of Big Bang Disruption

“If you have ever wondered what it takes to create something, read this inspiring and insightful book. Using examples ranging from Mozart to the Muppets, Kevin Ashton shows how to tap the creative abilities that lurk in us all. There are no secrets, no shortcuts; just ordinary steps we can all take to bring something new into the world. Ashton’s message is direct and hopeful: creativity isn’t just for geniuses—it’s for everybody.”
—Joseph T. Hallinan, author of Why We Make Mistakes

“A detailed and persuasive argument for how creativity actually works—not through magical bursts of inspiration but with careful thought, dogged problem-solving, and hard-won insight. Ashton draws on a wealth of illuminating and entertaining stories from the annals of business, science, and the arts to show how any of us can apply this process to our own work.”
—Mason Currey, author of Daily Rituals: How Artists Work

“If you consider yourself a curious person then you will love this book. Ashton shares so many delightful stories of where things come from and how things came to be, I seriously believe that it will make anyone who reads it smarter.”
—Simon Sinek, New York Times bestselling author of Start With Why and Leaders Eat Last

“How to Fly a Horse solves the mysteries of invention. Kevin Ashton, the innovator who coined the ‘internet of things,’ shows that creativity is more often the result of ordinary steps than extraordinary leaps. With engrossing stories, provocative studies, and lucid writing, this book is not to be missed.”
—Adam Grant, professor of management at the Wharton School and New York Times bestselling author of Give and Take

“Kevin Ashton’s new book How to Fly a Horse is all about the creative sorcery and motivational magic necessary to make impossible things happen in teams or as individuals. Through numerous examples of creative genius ranging from Einstein to the creators of South Park to the invention of jet planes and concertos, Ashton reveals the secrets of the great scientists, artists, and industrialists of the last few centuries.”
—John Maeda, author of The Laws of Simplicity and founder of the SIMPLICITY Consortium at the MIT Media Lab