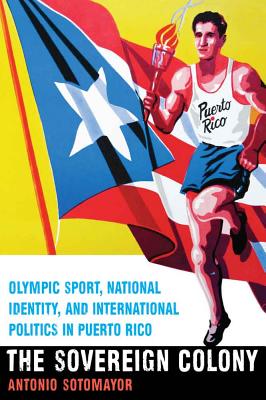 By Antonio Sotomayor
$60.00
Available to Order - Usually Arrives in Our Store in 4 to 7 Days

Ceded to the United States under the terms of the Treaty of Paris after the Spanish-American War of 1898, Puerto Rico has since remained a colonial territory. Despite this subordinated colonial experience, however, Puerto Ricans managed to secure national Olympic representation in the 1930s and in so doing nurtured powerful ideas of nationalism.

By examining how the Olympic movement developed in Puerto Rico, Antonio Sotomayor illuminates the profound role sports play in the political and cultural processes of an identity that evolved within a political tradition of autonomy rather than traditional political independence. Significantly, it was precisely in the Olympic arena that Puerto Ricans found ways to participate and show their national pride, often by using familiar colonial strictures—and the United States’ claim to democratic values—to their advantage. Drawing on extensive archival research, both on the island and in the United States, Sotomayor uncovers a story of a people struggling to escape the colonial periphery through sport and nationhood yet balancing the benefits and restraints of that same colonial status.

The Sovereign Colony describes the surprising negotiations that gave rise to Olympic sovereignty in a colonial nation, a unique case in Latin America, and uses Olympic sports as a window to view the broader issues of nation building and identity, hegemony, postcolonialism, international diplomacy, and Latin American–U.S. relations.

Antonio Sotomayor is an assistant professor and librarian of Latin American and Caribbean studies at the University of Illinois at Urbana-Champaign.

"Sotomayor gives undergraduate students and specialists an authoritative compendium of Puerto Rico’s politics during a period when the territory was billed as a regional showcase for the benefits of American power."—Reinaldo L. Román, American Historical Review
— Reinaldo L. Román

"[The Sovereign Colony is] a reading feast for Puerto Rican sport fans. . . . It contributes to the understanding of colonialism where the agency of colonial subjects is emphasized in their negotiations of power structures. . . . A must read for scholars of U.S. and Caribbean history."—Rosa Elena Carrasquillo, Diplomatic History
— Rosa Elena Carrasquillo

"An innovative approach to Puerto Rico's coloniality through the prism of sports. . . . This accessible account of Puerto Rican sport provides a great introduction to the complex issues of contemporary coloniality and will be an excellent addition to undergraduate collections."—B. A. Lucero, Choice
— B. A. Lucero

"Sotomayor's impressive volume says not only a great deal about the relationship between Puerto Rico and the US, but can be used in parallel to analyze similar colonial and territorial interrelationships within the geopolitics of global sport."—Matthew L. McDowell, Spectacular Tableau
— Matthew L. McDowell

“How is it that Puerto Rico participates with a sovereign team in the International Olympic Games? The answer to that question and Puerto Rico’s sporting success in the Central American and Caribbean Games provides the fascinating subject for Antonio Sotomayor’s book. He explains the baffling and perplexing dimensions of international sport.”—William H. Beezley, author of Judas at the Jockey Club and Other Episodes of Porfirian Mexico
— William H. Beezley

“A highly readable book that invites us to rethink many familiar tenets about contemporary colonialism, adding an important dimension to the last quarter century’s debates on what constitutes a nation—and how sports may help fashion one.”—Francisco A. Scarano, professor of history at the University of Wisconsin–Madison
— Francisco A. Scarano