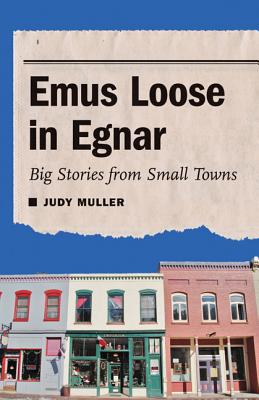 
Available to Order - Usually Arrives in Our Store in 4 to 7 Days
At a time when mainstream news media are hemorrhaging and doomsayers are predicting the death of journalism, take heart: the First Amendment is alive and well in small towns across America. In Emus Loose in Egnar, award-winning journalist Judy Muller takes the reader on a grassroots tour of rural American newspapers, from an Indian reservation in Montana to the Alaska tundra to Martha’s Vineyard, and discovers that many weeklies are not just surviving, but thriving. In these small towns, stories can range from club news to Klan news, from broken treaties to broken hearts, from banned books to escaped emus; they document the births, deaths, crimes, sports, and local shenanigans that might seem to matter only to those who live there. And yet, as this book shows us, these “little” stories create a mosaic of American life that tells us a great deal about who we are—what moves us, angers us, amuses us. Filled with characters both quirky and courageous, the book is a heartening reminder that there is a different kind of “bottom line” in the hearts of journalists who keep churning out good stories, week after week, for the corniest of reasons: that our freedoms depend on it.

Judy Muller is a professor at the Annenberg School for Communication and Journalism at the University of Southern California and is the author of Now This: Radio, Television, and the Real World. She is also an NPR commentator and has worked as a correspondent for ABC, CBS, and PBS, winning numerous Emmy awards and, in 2010, the prestigious Peabody Award.


"[Emus Loose in Egnar is an] engaging account of local journalism outside the major urban hubs. Without the muscle of a big-city newspaper—or the benefit of working at arm's length from public officials and advertisers—the passionate lunatics who put out America's small-town weeklies labor to keep local politicians honest while coping with anger, threats, pleading, exhaustion, poverty and, often, instead of gratitude, cold shoulders from neighbors on the checkout line at the IGA."—Daniel Akst, Wall Street Journal

"A read through this rather gentle, inquisitive look at small-town weekly newspapers could be beneficial to your health. It may even lower your big city blood pressure."—Jonathan Rickard, New York Journal of Books

“Readers of this book, which is a rare combination of important and entertaining, will be surprised to discover how much small-towners have to teach the rest of us about life, and how much their local weekly newspapers have to teach big-city news media about survival.”—Bill Geist, correspondent for CBS News Sunday Morning and best-selling author of Way Off the Road: Discovering the Peculiar Charms of Small-Town America

“Emus Loose in Egnar is what Mark Twain might have written if he had taken better care of himself and lived long enough to meet the collection of loners and lunatics in this book. I laughed until I cried, because I have been there.”—Richard Reeves, author of Daring Young Men and the founding editor of the Phillipsburg (NJ) Free Press