Colorado Politics and Policy: Governing a Purple State (Politics and Governments of the American States) (Paperback) 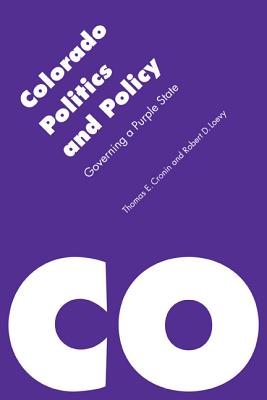 Survey after survey reveals that many Coloradans believe that the U.S. government is too big, too wasteful, and too intrusive. Yet Colorado is arguably one of the most federally subsidized states in the union, with forests, national parks, military bases, and research laboratories benefiting from the federal government’s largesse.
A concise history of Colorado’s constitution and central political institutions, Colorado Politics and Policy offers a probing analysis of the state’s political cultures. It shows how the state, in many ways a template of the deeply contrary politics of the nation, puts political power into the hands of an ever-more-polarized electorate increasingly inclined to put the concerns of government to the test of the citizen-initiative.
Colorado Politics and Policy is the result of broad-gauged and sophisticated research which includes author interviews with citizens and officials across the state, three specially commissioned statewide public opinion surveys, and extensive interviews with governors, legislators, judges, lobbyists, interest group leaders, and leading political analysts.
This fresh and engaging interpretation is essential reading for those who want to understand Colorado’s major election trends, chief public policy and budget challenges, and this distinctively purple state’s unique political history.

Thomas E. Cronin is the McHugh Professor of American Government and Leadership at Colorado College. He has received awards for teaching, research, and advising, and has authored, coauthored, or edited more than a dozen books, including best-selling books on American government and the American presidency. His latest book is Leadership Matters, coauthored with Michael A. Genovese. He is president emeritus of Whitman College and a past president of the Western Political Science Association and of the Presidency Research Group. He has been involved in politics at all levels, from local precinct chair to member of the White House staff.

Robert D. Loevy is a political scientist at Colorado College, focusing on political parties, American elections, Congress, and state and local government. The author or coauthor of ten books on American government, he has won many awards for his teaching and service. He has worked on the staff of a U.S. senator and has held a wide range of civic positions in Colorado, including serving on the Colorado Springs Planning Commission and the Colorado State Reapportionment Commission. His latest book is Confessions of a Reapportionment Commissioner, available online.

“Tom Cronin and Bob Loevy have captured the complexities of Colorado policy making in this wonderful book. It clearly explains the challenges our state faces: conflicting constitutional measures; our inclination toward direct democracy through initiatives; and the personalities and organizations that sometimes join hands and sometimes oppose each other as measures move through the system. It’s a fascinating read.”—Gail Klapper, chair of Colorado Forum

“A valuable guide for reporters, legislators, activists, and others who want to understand Colorado’s often unique system of governance. Sections on finance and taxes are especially useful because of the strange things we Coloradans have done to complicate our fiscal policy.”—Fred Brown, veteran political columnist for the Denver Post

“Cronin and Loevy have given us a uniquely valuable handbook for anyone who is concerned with sustaining and strengthening the ‘consent of the governed’ in Colorado. The authors’ perspectives and prescriptions are stimulating, whether or not one agrees.”—John Andrews, former president, Colorado State Senate, and former Republican candidate for governor of Colorado

“A superb job of relating the past to the present and preparing the reader for tomorrow's Colorado.”—Duane A. Smith, Colorado historian, Fort Lewis College

“Terrific book! It captures the state, its politics, and its political culture extremely well. The issues and challenges laid out in the final chapter are right on.”—Jim Carpenter, partner, Stratton-Carpenter and Associates, and former chief of staff for Governor Bill Ritter
— Jim Carpenter