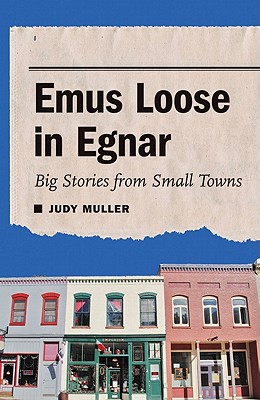 
Available to Order - Usually Arrives in Our Store in 4 to 7 Days
At a time when mainstream news media are hemorrhaging and doomsayers are predicting the death of journalism, take heart: the First Amendment is alive and well in small towns across America. In Emus Loose in Egnar, award-winning journalist Judy Muller takes the reader on a grassroots tour of rural American newspapers, from an Indian reservation in Montana to the Alaska tundra to Martha’s Vineyard, and discovers that many weeklies are not just surviving, but thriving.
In these small towns, stories can range from club news to Klan news, from broken treaties to broken hearts, from banned books to escaped emus; they document the births, deaths, crimes, sports, and local shenanigans that might seem to matter only to those who live there. And yet, as this book shows us, these “little” stories create a mosaic of American life that tells us a great deal about who we are—what moves us, angers us, amuses us. Filled with characters both quirky and courageous, the book is a heartening reminder that there is a different kind of “bottom line” in the hearts of journalists who keep churning out good stories, week after week, for the corniest of reasons: that our freedoms depend on it. Not that they would put it that way, necessarily. In the words of one editor in Colorado, “If we found a political official misusing taxpayer funds, we wouldn’t hesitate to nail him to a stump.”

Judy Muller is an associate professor at the Annenberg School for Communication and Journalism at the University of Southern California and is the author of Now This: Radio, Television, and the Real World. She is also an NPR commentator and has worked as a correspondent for ABC, CBS, and PBS, winning numerous Emmy awards and, in 2010, the prestigious Peabody Award. She began her career at a weekly newspaper in Freehold, New Jersey. She now resides in Los Angeles, California, and Norwood, Colorado. She prefers Norwood.
"Very occasionally under threat of violence, more often facing social isolation or financial pressure, these rural journalists' devotion to truth-telling keeps the First Amendment alive and communities connected in grassroots America."—Kirkus

"Created and maintained by a stalwart breed of writers, editors, and publishers who are committed to their craft and its purpose, local newspapers may be struggling more than their big-city counterparts, but that just makes their David/Goliath personae more appealing. Doggedly traversing the country from Montana to Martha's Vineyard to spotlight the best of this bucolic bunch, Muller insightfully reveals the stories both large and small that divide and unite their readers, and profiles the dedicated individuals who even risk their lives to bring controversial issues and facts to light."—Carol Haggas, Booklist

"A read through this rather gentle, inquisitive look at small-town weekly newspapers could be beneficial to your health. It may even lower your big city blood pressure."—Jonathan Rickard, New York Journal of Books

"[Emus Loose in Egnar is an] engaging account of local journalism outside the major urban hubs. Without the muscle of a big-city newspaper—or the benefit of working at arm's length from public officials and advertisers—the passionate lunatics who put out America's small-town weeklies labor to keep local politicians honest while coping with anger, threats, pleading, exhaustion, poverty and, often, instead of gratitude, cold shoulders from neighbors on the checkout line at the IGA."—Daniel Akst, Wall Street Journal

"Emus demonstrates that the best local journalism begins with community connection and knowledge—not just with a dateline—and is heavily dependent on those who lead it. No matter what the platform, journalism at this level can serve communities powerfully or fail them significantly. Muller makes us glad for the "hyperlocal" stalwarts who do things right."—Melanie Sill, Online Journalism Review