Seminole Voices: Reflections on Their Changing Society, 1970-2000 (Indians of the Southeast) (Hardcover) 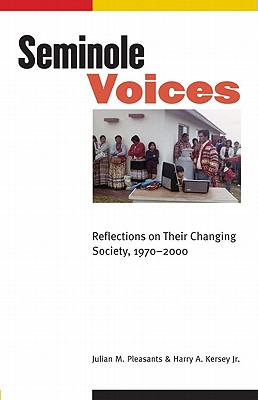 Seminole Voices: Reflections on Their Changing Society, 1970-2000 (Indians of the Southeast) (Hardcover)


Available to Order - Usually Arrives in Our Store in 4 to 7 Days
In a series of interviews conducted from 1969 to 1971 and again from 1998 to 1999, more than two hundred members of the Florida Seminole community described their lives for the Samuel Proctor Oral History Program at the University of Florida. Some of those interviews, now showcased in this volume, shed light on how the Seminoles’ society, culture, religion, government, health care, and economy had changed during a tumultuous period in Florida’s history. In 1970 the Seminoles lived in relative poverty, dependent on the Bureau of Indian Affairs, tourist trade, cattle breeding, handicrafts, and truck farming. By 2006 they were operating six casinos, and in 2007 they purchased Hard Rock International for $965 million. Within one generation, the tribe moved from poverty and relative obscurity to entrepreneurial success and wealth. Seminole Voices relates how economic changes have affected everyday life and values. The Seminoles’ frank opinions and fascinating stories offer a window into the world of a modern Native community as well as a useful barometer of changes affecting its members at the beginning of the twenty-first century.
Julian M. Pleasants is an emeritus professor of history at the University of Florida. He is the author of several books, including Hanging Chads: The Inside Story of the 2000 Presidential Recount in Florida.  Harry A. Kersey Jr. is an emeritus professor of history at Florida Atlantic University. He is the author of several books, including An Assumption of Sovereignty: Social and Political Transformation among the Florida Seminoles, 1953–1979 (Nebraska 1996), and the coauthor of Buffalo Tiger: A Life in the Everglades, available in a Bison Books edition.