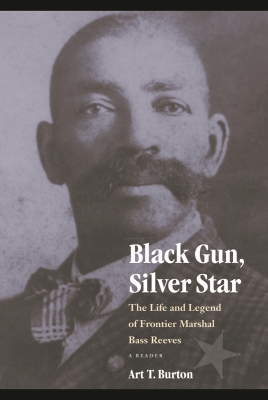 Deputy U.S. Marshal Bass Reeves appears as one of “eight notable Oklahomans,” the “most feared U.S. marshal in the Indian country.” That Reeves was also an African American who had spent his early life as a slave in Arkansas and Texas makes his accomplishments all the more remarkable. Bucking the odds (“I’m sorry, we didn’t keep black people’s history,” a clerk at one of Oklahoma’s local historical societies answered a query), Art T. Burton sifts through fact and legend to discover the truth about one of the most outstanding peace officers in late nineteenth-century America—and perhaps the greatest lawman of the Wild West era. Fluent in Creek and other southern Native languages, physically powerful, skilled with firearms, and a master of disguise, Reeves was exceptionally adept at apprehending fugitives and outlaws, and his exploits were legendary in Oklahoma and Arkansas. A finalist for the 2007 Spur Award, sponsored by the Western Writers of America, Black Gun, Silver Star tells Bass Reeves’s story for the first time and restores this remarkable figure to his rightful place in the history of the American West.   Purchase the audio edition.

Art T. Burton is a professor of history at South Suburban College in South Holland, Illinois. He is the author of Black, Buckskin, and Blue: African American Scouts and Soldiers on the Western Frontier and Black, Red, and Deadly: Black and Indian Gunfighters of the Indian Territory, 1870–1907.

“Aside from a few fluff films (like Mel Brooks’s Blazing Saddles) and a smattering of lesser-known scholarship, the African-American presence in Wild West history has been severely underrepresented. . . . Against this backdrop rises Burton’s painstaking account of U.S. Deputy Marshal Bass Reeves. . . . Rigorous and impartial, Burton is less concerned with entertainment than faithful research—no small task given the Old West’s diverse and troubled racial climate, in which black accomplishment often went overlooked. But dedicated readers will become acquainted with a brave, resourceful lawman and the patchwork of homesteaders, murderers, horse thieves and bootleggers he governed.” —Publishers Weekly.

“Burton has completed a solid research effort, and his writing is clear. . . . Available sources do not allow Burton to resolve all the controversies about the exact details of Reeve’s life, but Burton has given new literary life to a black lawman in a white (and Indian) world.”—James M. Smallwood, Arkansas Historical Quarterly

"As Burton traces Reeves' exploits through oral accounts, records of court proceedings and scraps of correspondence, his fascination with the subject helps to maintain a vigorous pace and ultimately makes Black Gun, Silver Star an eye-opening study of justice and race in the Old West."—Nick Smith, The Post and Courier (Charleston, SC)

“The book is a good addition to the history of law enforcement in the Twin Territories. Students of this area will certainly want to add the book to their library.”—Western Outlaw-Lawman History Association Journal

"[Burton's] years of research resulted in a remarkable story of an Old West giant, one who arguably was the best in his business."—True West

"[This] biography is more statement of fact than tribute to Reeves and no punches are pulled. Bass had an exceptionally long tenure as a Deputy U. S. Marshal and made a few mistakes along the way. These are covered. But, so too, are the remarkable feats he accomplished. . . . No critic, then or now has been able to show that Bass did not do good and bring law and order to the frontier. Art's rendering takes on all comers and their questions. The book is a heck of a good read and not the least bit painful."—Mike Tower, Oklahombres.org

"Burton is a generous author who shares his thinking and analysis with the reader, and explains his personal fascination with the story of Bass Reeves. The result is a highly readable book with a tone that will appeal to several audiences."—Barbara C. Behan, Journal of African American History

"This is a book that should become mandatory reading for any student of American Frontier history. Black Gun, Silver Star not only answers questions about Bass Reeves, the man, but it also provides insight into the incredible courage and extraordinary skill required in nineteenth-century law enforcement. Those with a passion for history, particularly of the nineteenth century, will find this biography of Reeves to be an essential book for their library."—Angela Y. Walton-Raji, author of Black Indian Genealogy Research

"Art Burton has resurrected a heroic Black U. S. Deputy Marshal that thieves and outlaws in the Indian Territory could not kill but was practically eliminated by scholars of frontier history."—Bruce T. Fisher, Curator of African American History, Oklahoma Historical Society

"In the long, sanguinary history of the battle to bring law and order to the violent American West there was no greater or more important figure than this former slave who spent his life enforcing the law in what was the most lawless section of the country. Because Reeves was black, his remarkable career for the most part was overlooked by the contemporary press, making it difficult now to reconstruct his history, but author Art Burton has admirably tackled the task and told a story, long overdue."—Robert K. DeArment, author of Bravo of the Brazos: John Larn of Fort Griffin, Texas

"Art Burton's extensive research for Black Gun, Silver Star fleshes out the fascinating life story and exploits of a former slave who became one of the most famous lawmen in the Indian Territory days of 'Hanging Judge' Isaac Parker."—William Black, Superintendent Fort Smith National Historic Site