The American Dream in Black and White (Paperback) 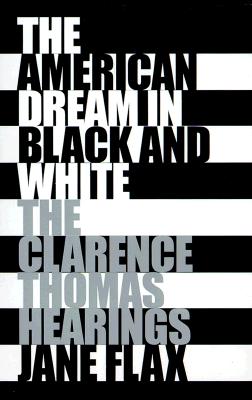 The American Dream in Black and White (Paperback)

This is not... the nomination of a justice of the peace to some small county in some small state. This involves the very integrity and fabric of our country.--Senator Orrin G. HatchThe transcripts of the Senate Judiciary Committee hearings on Clarence Thomas are extraordinarily rich and suggestive. Much has been written about the hearings, but until now, no one has paid close attention to the actual language of the participants. Revisiting the words of Clarence Thomas and Anita Hill, Jane Flax asks what we would learn about American politics if these hearings were, literally, our only text. Orrin Hatch's assertion was, indeed, perhaps more insightful than he realized. How does our legal and judicial system operate in the face of sexual issues? Can it ever transcend race and gender? Who was the real victim in these hearings--Hill, Thomas, the Senate, or the viewing public? Who in America has the power to make political meaning? Rather than attempting to establish fact or truth, The American Dream in Black and White looks at the political narrative by which our nation makes sense of itself. The senators' own anxieties about their publicly televised role were evident throughout these hearings. Given our conviction that we are a nation built on freedom and equality, says Flax, the Senate committee had no choice but to confirm Thomas, thereby validating the cherished belief that with virtue and hard work, even a barefoot boy from Pin Point, Georgia, can transform himself into a Supreme Court Justice. To have turned him down would have called into question the very legitimacy of our politics and law. To have sympathized with Anita Hill, seen as having brought filthy material into public view, was impossible. Demonstrating the powerful, public role of narrative, The American Dream in Black and White reveals the hearings as a dramatic challenge to the American political system--a system supposed to rise not only above gender and race, but also above any issue of sex, guilt, history, or personal identity. Anita Hill's and Clarence Thomas's conflicting accounts, Flax argues, are a measure of the stories we tell about ourselves. Drawing on feminist, political, and psychoanalytic theory, she shows how these transcripts reveal deep and serious fissures in the psychic fabric of contemporary Americans, black and white, male and female. Identity politics and abstract individualism reflect rather than repair these fissures, and the lingering discomfort with the hearings reflects the necessity of new political theories and practices.

Jane Flax is Professor of Political Science at Howard University and a psychotherapist in private practice. She is the author of Thinking Fragments: Psychoanalysis, Feminism, and Postmodernism in the Contemporary West and Disputed Subjects: Essays on Psychoanalysis, Politics, and Philosophy.