To Set This World Right: The Antislavery Movement in Thoreau's Concord (Hardcover) 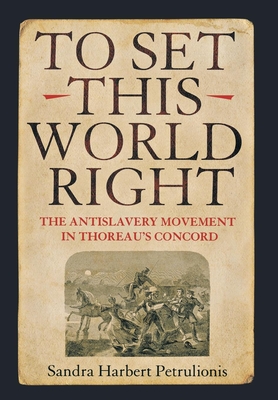 To Set This World Right: The Antislavery Movement in Thoreau's Concord (Hardcover)

In the decade before the Civil War, Concord, Massachusetts, was a center of abolitionist sentiment and activism. To Set this World Right is the first book to recover and examine the voices, events, and influence of the antebellum antislavery movement in Concord. In addressing fundamental questions about the origin and nature of radical abolitionism in this most American of towns, Sandra Harbert Petrulionis frames the antislavery ideology of Henry Thoreau and Ralph Waldo Emerson--two of Concord's most famous residents--as a product of family and community activism and presents the civic context in which their outspoken abolitionism evolved.

In this historic locale, radical abolitionism crossed racial, class, and gender lines as a confederation of neighbors fomented a radical consciousness, and Petrulionis documents how the Thoreaus, Emersons, and Alcotts worked in tandem with others in their community, including a slaveowner's daughter and a former slave. Additionally, she examines the basis on which Henry Thoreau--who cherished nothing more than solitary tramps through his beloved woods and bogs--has achieved lasting fame as a militant abolitionist.

This book marshals rich archival evidence of the diverse tactics exploited by a small coterie of committed activists, largely women, who provoked their famous neighbors to action. In Concord, the fugitive slave Shadrach Minkins was clothed and fed as he made his way to freedom. In Concord, the adolescent daughters of John Brown attended school and recovered from their emotional distress after their father's notorious public hanging. Although most residents of the town maintained a practiced detachment from the plight of the enslaved, women and men whose sole objective was the moral urgency of abolishing slavery at last prevailed on the philosophers of self-culture to accept the responsibility of their reputations.

Sandra Harbert Petrulionis is Associate Professor of English at Penn State Altoona. She is the editor of Journal 8: 1854 in The Writings of Henry D. Thoreau and coeditor of More Day to Dawn: Thoreau's Walden for the Twenty-First Century.