Jazz 101: A Complete Guide to Learning and Loving Jazz (Paperback) 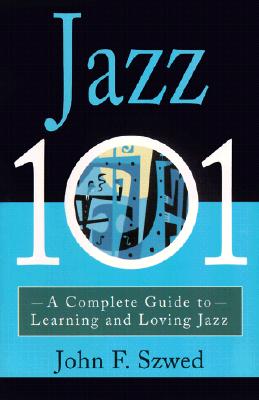 A vital tool in understanding and appreciating jazz -- introducing the key figures, theory, and the controversies that shaped it development -- that explores how it became North America's most popular music in less than fifty years.

Often called America's only original art form, jazz is also one of our least understood. This fascinating entry into the world of jazz for the beginner, novice, casual enthusiast, or anyone who thinks jazz stopped developing in the 1950s, a misconception widely held today, debunks fallacies and analyzes the myths, history, and developments of this enthralling art form.

John F. Szwed, anthropologist, critic, and musical scholar, takes readers on a tour of the varied and nonlinear history of jazz, exploring how it developed from an ethnic music to popular music to part of the avant garde in less than fifty years. But he also offers insightful commentary on how jazz changed the way the world would look at music.

Jazz 101 makes jazz, with all its intricacies of artistry and vast array of forms, accessible to readers in fluid, entertaining prose.

John F. Szwed is currently a professor of anthropology, African and African-American studies, music, and American studies at Yale University. He has written seven books on music and African-American culture and numerous articles and reviews on related subjects. His honors include a Guggenheim Fellowship and a Rockefeller Foundation Humanities Fellowship. He lives in Connecticut.