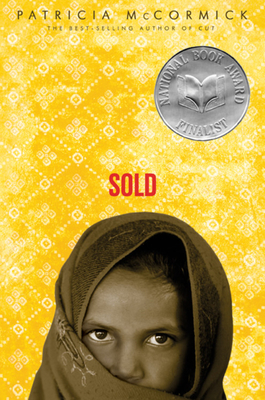 
On Our Shelves Now
The powerful, poignant, bestselling National Book Award Finalist gives voice to a young girl robbed of her childhood yet determined to find the strength to triumph Lakshmi is a thirteen-year-old girl who lives with her family in a small hut on a mountain in Nepal. Though she is desperately poor, her life is full of simple pleasures, like playing hopscotch with her best friend from school, and having her mother brush her hair by the light of an oil lamp. But when the harsh Himalayan monsoons wash away all that remains of the family's crops, Lakshmi's stepfather says she must leave home and take a job to support her family.

He introduces her to a glamorous stranger who tells her she will find her a job as a maid in the city. Glad to be able to help, Lakshmi journeys to India and arrives at "Happiness House" full of hope. But she soon learns the unthinkable truth: she has been sold into prostitution.

An old woman named Mumtaz rules the brothel with cruelty and cunning. She tells Lakshmi that she is trapped there until she can pay off her family's debt-then cheats Lakshmi of her meager earnings so that she can never leave.

Lakshmi's life becomes a nightmare from which she cannot escape. Still, she lives by her mother's words-Simply to endure is to triumph-and gradually, she forms friendships with the other girls that enable her to survive in this terrifying new world. Then the day comes when she must make a decision-will she risk everything for a chance to reclaim her life?

Written in spare and evocative vignettes by the co-author of I Am Malala (Young Readers Edition), this powerful novel renders a world that is as unimaginable as it is real, and a girl who not only survives but triumphs.
To research Sold, Patricia McCormick traveled to India and Nepal, where she interviewed the women of Calcutta's red-light district and girls who have been rescued from the sex trade. Patricia is a two-time National Book Award finalist, and the author of five critically acclaimed novels, among them Never Fall Down, the story of a boy who survived the Killing Fields of Cambodia by playing music for the Khmer Rouge. Her other books include the YA classic Cut, and the young readers' edition of I Am Malala, the story of the Pakistani girl who was targeted by the Taliban for standing up for education. She lives in Manhattan.