Indestructible: The Unforgettable Story of a Marine Hero of Iwo Jima (Compact Disc) 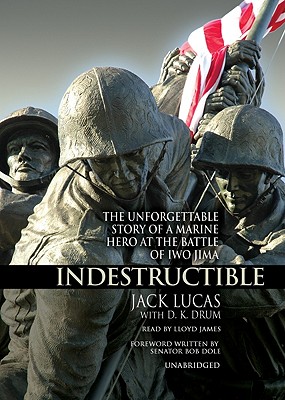 Indestructible: The Unforgettable Story of a Marine Hero of Iwo Jima (Compact Disc)

At the height of the Battle of Iwo Jima, the day after the island invasion began, Jack Lucas and three other Marines were attacking a Japanese pillbox when two enemy grenades landed in their midst. Private Lucas jumped on both of them, driving them into the volcanic ash. Then they exploded. Thus did a seventeen-year-old from North Carolina become the youngest soldier in the twentieth century--and the youngest Marine in history--to receive the Congressional Medal of Honor.

Today, when Jack Lucas speaks, crowds gather to honor him and pay tribute to Marine heritage and pride. Mr. Lucas is as close a thing to a rock star as our World War II generation has.