Led Zeppelin: Expanded Edition, All the Albums, All the Songs (Hardcover) 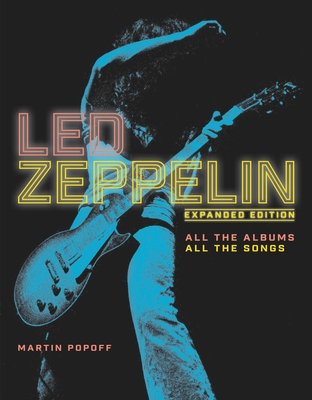 Led Zeppelin: Expanded Edition, All the Albums, All the Songs (Hardcover)


Available to Order - Usually Arrives in Our Store in 4 to 7 Days
One of the world’s most prolific bands is being broken down track by track, album by album—and you have tickets to the details, facts, and secrets in Led Zeppelin​.

Formed by the unlikely alliance of two ace London studio musicians and two bar-band bumpkins, Led Zeppelin went on to create the template for the marauding modern rock ’n’ roll band. Often described as “heavy,” any true fan will tell you that the band’s 9 studio albums and 81 tracks thereon are actually a complex amalgam of blues, psychedelia, rock, folk, and country that reveal the influences of Led Zeppelin’s four members.

Veteran music journalist Martin Popoff picks apart each of these 81 tracks in exquisite detail, and for the first time ever, you can come along for the ride. Popoff analyzes the circumstances that led to their creation, the recording processes, the historical contexts, and more. Offstage and performance photography, as well as images of rare memorabilia, bring the band’s story to vivid life.

Included as a special bonus, he also offers an introductory essay on each of the band’s nine studio albums, and sidebar features that explore influences on the band as well as song details, such as running time, instruments played, engineers, and studios.

Martin Popoff has been described as the world’s most famous heavy-metal journalist, though he has covered plenty of Punk and New Wave albums in his career of 7,000-plus album reviews. He has penned many books on various bands, genres of rock, and record collecting, including Voyageur Press’ Rush: The Illustrated History; Metallica: The Complete Illustrated History; The Art of Metal; and The Big Book of Hair Metal. He has also worked on film documentaries about Rush and ZZ Top. Popoff lives in Toronto.