Here and Now and Then (Hardcover) 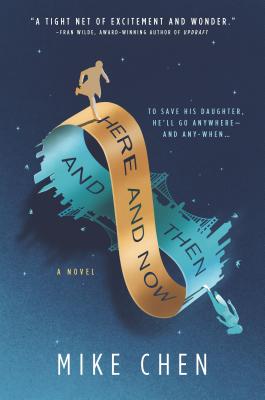 This is going to be one of the best books you read in 2019—I guarantee it. I read this book in two days because I seriously couldn’t put it down. It’s as if Frequency and Outlander had a baby—but not the sexy, romance, Scotland side of Outlander. I’m talking about the heartbreaking tale of a woman being ripped out of her time and then having to choose one life over the other. And then Frequency comes in with family and the willingness to do anything for those you love. It’s a basic and rather overrun concept in stories, but this was a fresh spin and well written and well told. It hit familiar strings but was a breath of fresh air. With the geeky references (which were just icing on the cake) and the science and the sort of weird but heartfelt plot, I really believe that this book is going to hit a wide demographic. It’s that good.

A Goodreads Choice Awards 2019 Semifinalist One of BookBub's Best Science Fiction Books of 2019 One of Book Riot's Best Books of 2019 So Far One of The Nerd Daily's Best Debut Novels of 2019 Featured in The Millions "A Year in Reading" One of Entropy's Best Fiction Books of 2019 He'll go anywhere and any when to save his daughter Kin Stewart is an everyday family man: working in IT, trying to keep the spark in his marriage, struggling to connect with his teenage daughter. But his current life is a far cry from his previous career...as a time-traveling secret agent from over a century in the future. Stranded in suburban San Francisco since the 1990s after a botched mission, Kin has kept his past hidden from everyone around him, until one afternoon, his "rescue" team arrives--eighteen years too late. Their mission: return Kin to 2142, where he's been gone only weeks, not years, and where another family is waiting for him. A family he can't remember. Torn between two lives, Kin's desperate efforts to stay connected to both will threaten to destroy the agency and even history itself. With his daughter's very existence at risk, he will have to take one final trip to save her--even if it means breaking all the rules of time travel in the process. "Heartfelt and thrilling... Chen's concept is unique, and his characters'] agony is deeply moving. Quick pacing, complex characters, and a fascinating premise."--Publishers Weekly, starred review