One Game at a Time: My Journey from Small-Town Alberta to Hockey's Biggest Stage (Hardcover) 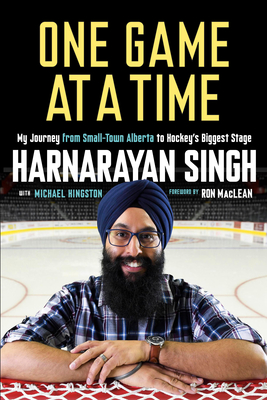 By Harnarayan Singh
$24.00
On Our Shelves Now

From the distinct and vibrant voice behind Hockey Night in Canada Punjabi comes the story of pursuing a dream and defying the odds, reminding us all of hockey's power to unite.

Ask a hockey fan if they have heard the wonderfully electric call of Nick Bonino's overtime-winning goal from the 2016 Stanley Cup Final and they will almost surely answer with a resounding yes! That's because video clips of the Hockey Night in Punjabi broadcast immediately went viral, amplifying the profile of Harnarayan Singh, the voice behind the call.

Growing up in small-town Alberta, Harnarayan was like many other kids who dreamed about a life within the sanctum of the game they idolized. There was only one small difference--he didn't look like any of the other kids. And when he sat down on Saturday nights to tune in to Hockey Night in Canada with the rest of the nation, he couldn't ignore the fact that the broadcasters or analysts didn't look like him either. Undeterred, Harnarayan worked his way from calling imaginary hockey games with his plastic toy microphone as a child, to funding secret flights from Calgary to Toronto every weekend in the early days of Hockey Night in Punjabi, to making history as the first Sikh to broadcast an NHL game in English.

Full of heart, humour, and bursting with personality (and maybe a few family prayers for Wayne Gretzky), One Game at a Time is the incredible and inspiring story of how Harnarayan Singh broke through the longstanding barriers and biases of the sport he loves. But more than that, Harnarayan blends his unabashed love of hockey with a refreshing and necessary positive message about what it means to be a Canadian in the world, making him one of the most influential ambassadors of the game today.

HARNARAYAN SINGH is a co-host and play-by-play announcer, having called over 700 NHL games for Hockey Night in Canada Punjabi, along with becoming a host in English with Sportsnet for select national games. Having previously worked for CBC and TSN, Harnarayan also produces a segment in Calgary called Flames TV Punjabi and serves on the Board of Directors for HEROS Hockey, a charity empowering marginalized youth through mentorship. In 2018, Harnarayan was the recipient of the Meritorious Service Medal by the Governor General of Canada for his contributions to Canadian society. He also serves as an ambassador for the NHL's Hockey Is For Everyone program and Chevrolet Canada's Good Deeds Cup. Follow him @IceSinghHNIC

“One Game at a Time is a work that should be read by everybody, not just those in the hockey world. Harnarayan takes the reader on a journey across the globe and back in time, relating his experiences of balancing his own faith and culture with Canada’s favourite sport. His work ethic and commitment to be an amazing broadcaster, as well as a strong advocate for social and racial equality is truly inspiring. I’m so happy for all of his success and I urge everyone to read and learn from his story, as I have.” —Nick Bonino, NHL player

“Harnarayan has to be one of the hardest working people I know. He was given an opportunity and didn’t only just take advantage of that opportunity, but he crushed it out of the park. He will always be someone I value not only as a hockey broadcaster, but as a person. I have known him a long time, well before he became this amazing broadcaster, and he is just as humble and genuine today as he was the day I first met him.” —Cassie Campbell-Pascall, Olympian and hockey broadcaster

“Give Harnarayan Singh the Masterton. His is a story of perseverance and dedication to hockey—a small-town kid from Brooks, Alberta who wouldn't say no to any of the obstacles in his path.” —Eric Duhatschek, senior writer, The Athletic

“Being a trailblazer is never easy but with steadfast perseverance, Harnarayan Singh overcame challenges most people would have found insurmountable. Harnarayan is a true Canadian success story.” —Kelly Hrudey, analyst, Hockey Night in Canada and Sportsnet, and author of Calling the Shots

“Whenever I hear Harnarayan call hockey I think to myself, ‘He’s singing the game.’ It’s exciting, lyrical, and beautiful. His story is one of dreams, passion, sacrifice, and dedication; his lesson is about unity and respect—all while creating a new language for hockey.” —Jeff Marek, NHL host on Sportsnet and 31 Thoughts

“Come for the story of what Harnarayan Singh says to people who tell him to ‘go back where he came from’; stay for BoninoBoninoBonino and the hard-working kid from ‘the only Sikh family in Brooks’ living out his dreams on Hockey Night in Canada.” —Bob McKenzie, TSN Hockey Insider and author of Hockey Confidential

“One Game at a Time is the hockey story that Canada needs right now. Singh offers us a unique narrative, but one that is also extremely recognizable to those of us who have never quite fit into the commonly told stories about hockey in Canada. It is a beautiful story about determination and resilience in the face of discrimination, while also highlighting the power that allies have in creating space for new people and diverse perspectives.” —Courtney Szto, Assistant Professor, School of Kinesiology and Health Studies, Queen's University

“Reading One Game at a Time was powerfully nostalgic as it reminded me of the power of hockey to connect. Harnarayan's words transported me into his living room with his family to watch Hockey Night in Canada; it was on nights just like those, between periods, that I would lace up and jump on our backyard rink to take shots on our net. Meanwhile, on those very same evenings, a young Harnarayan was perfecting his craft practicing goal calls, in a small town hundreds of kilometres away. Hockey unites us and I appreciate Harnarayan's remarkable ability to draw us into his gratitude for the game throughout this career, because I too know that gratitude.” —Hayley Wickenheiser, 4-time Olympic Gold Medalist

“So many people told Harnarayan that his dream to be a hockey commentator was ‘impossible.’ The fact that he is now living his dream speaks to the opportunities and values that define our country. What a story!” —Brian Williams, Olympic Broadcaster and O.C.