The Unhealthy Truth: One Mother's Shocking Investigation into the Dangers of America's Food Supply-- and What Every Family Can Do to Protect Itself (Paperback) 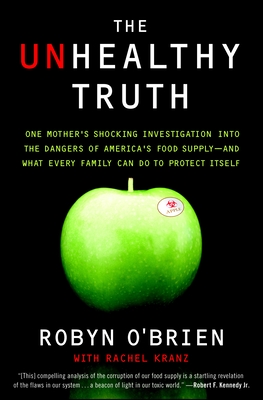 The Unhealthy Truth: One Mother's Shocking Investigation into the Dangers of America's Food Supply-- and What Every Family Can Do to Protect Itself (Paperback)


Email or call for price. Handling fee may apply.
Robyn O’Brien is not the most likely candidate for an antiestablishment crusade. A Houston native from a conservative family, this MBA and married mother of four was not someone who gave much thought to misguided government agencies and chemicals in our food—until the day her youngest daughter had a violent allergic reaction to eggs, and everything changed. The Unhealthy Truth is both the story of how one brave woman chose to take on the system and a call to action that shows how each of us can do our part and keep our own families safe.

O’Brien turns to accredited research conducted in Europe that confirms the toxicity of America’s food supply, and traces the relationship between Big Food and Big Money that has ensured that the United States is one of the only developed countries in the world to allow hidden toxins in our food—toxins that can be blamed for the alarming recent increases in allergies, ADHD, cancer, and asthma among our children. Featuring recipes and an action plan for weaning your family off dangerous chemicals one step at a time The Unhealthy Truth is a must-read for every parent—and for every concerned citizen—in America today.
Robyn O’Brien is the founder of AllergyKids. She has been featured in the New York Times and has appeared on CNN, Good Morning America, and the CBS Early Show and Evening News. She lives with her family in Boulder, Colorado.

Rachel Kranz is a novelist, nonfiction writer, and playwright who lives in New York City. Her most recent novel is Leaps of Faith (2000).