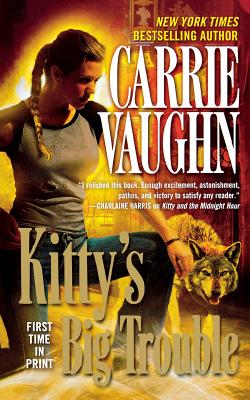 This is book number 9 in the Kitty Norville series.

Kitty Norville is back and in more trouble than ever. Her recent run-in with werewolves traumatized by the horrors of war has made her start wondering how long the US government might have been covertly using werewolves in combat. Have any famous names in our own history might have actually been supernatural? She's got suspicions about William Tecumseh Sherman. Then an interview with the right vampire puts her on the trail of Wyatt Earp, vampire hunter.

But her investigations lead her to a clue about enigmatic vampire Roman and the mysterious Long Game played by vampires through the millennia. That, plus a call for help from a powerful vampire ally in San Francisco, suddenly puts Kitty and her friends on the supernatural chessboard, pieces in dangerously active play. And Kitty Norville is never content to be a pawn. . . .

Carrie Vaughn is best known for her New York Times bestselling Kitty Norville series of novels about a werewolf who hosts a talk radio show for the supernaturally disadvantaged. Her novels include a near-Earth space opera, Martians Abroad, from Tor Books, and the post-apocalyptic murder mysteries Bannerless and The Wild Dead. She's written several other contemporary fantasy and young adult novels, as well as upwards of 80 short stories, two of which have been finalists for the Hugo Award. She's a contributor to the Wild Cards series of shared world superhero books edited by George R. R. Martin and a graduate of the Odyssey Fantasy Writing Workshop. An Air Force brat, she survived her nomadic childhood and managed to put down roots in Boulder, Colorado.

“Enough excitement, astonishment, pathos, and victory to satisfy any reader.” —Charlaine Harris on Kitty and the Midnight Hour

“Vaughn's deft touch at characterization and plot development has made this series hugely entertaining and not to be missed!” —Romantic Times Book Reviews on the Kitty Norville books