Judgment at Appomattox: A Novel (The Battle Hymn Cycle #5) (Paperback) 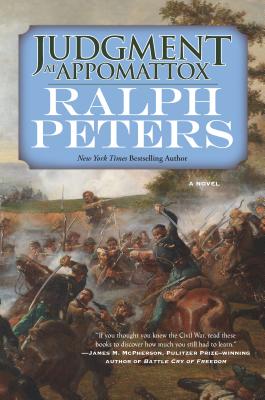 Judgment at Appomattox: A Novel (The Battle Hymn Cycle #5) (Paperback)

This is book number 5 in the The Battle Hymn Cycle series.

Written with the literary flair and historical accuracy readers expect from Ralph Peters, Judgment at Appomattox takes readers through the Civil War’s last grim interludes of combat as flags fall and hearts break.

A great war nears its end. Robert E. Lee makes a desperate, dramatic gamble that fails. Richmond falls. Each day brings new combat and more casualties, as Lee’s exhausted, hungry troops race to preserve the Confederacy. But Grant does not intend to let Lee escape. . . . In one of the most thrilling episodes in American history, heroes North and South battle each other across southern Virginia as the armies converge on a sleepy country court house.

Capping the author’s acclaimed five-novel cycle on the war in the East, this “dramatized history” pays homage to all the soldiers who fought, from an Irish-immigrant private wearing gray, to the “boy generals” who mastered modern war. This is a grand climax to a great, prize-winning series that honors—and reveals—America’s past.

“The final volume of Ralph Peters’ series on the epic story of the Army of the Potomac and Army of Northern Virginia from Gettysburg to Appomattox lives up to the standard of high drama of its predecessors. Here is fiction firmly rooted in historical sources, dialogue that reflects the genuine vernacular, personalities true to the characters they portray. If you thought you knew the Civil War, read these books to discover how much you still had to learn.” —James McPherson, Pulitzer Prize-winning author of Battle Cry of Freedom

“Ralph Peters makes history come alive. His vivid prose captures the burdens of command, the horrors and exhilarations of combat, the hopes and fears of the soldiers—all with deep respect for historical accuracy. Grant and Lee, Meade and Longstreet, Sheridan and Gordon, and so many other historical figures emerge from these pages as living, breathing human beings, teeming with the range of motives and emotions that mark the human condition.” —Richard J. Sommers, author of Richmond Redeemed: The Siege of Petersburg

“Ralph Peters brings to life the dramatic story of the largely overlooked—yet most significant—campaign of the Civil War. The reader becomes part of the armies, from Fort Stedman to Lee’s surrender. Another riveting narrative by this prolific author.” —Patrick A. Schroeder, Historian, Appomattox Court House National Historical Park

"Once again a master of historical military fiction has made real the sound and fury of the Civil War.” —Kirkus Reviews, starred review

“For those who want to truly understand what the war was like for the men who fought and endured it, there is no better reference than Ralph Peters’ five Civil War novels . . . superbly researched, richly imagined, brilliantly written.” —America’s Civil War

"Epic . . . battles explode from Ralph Peters' pen . . . with his five-novel masterwork—from Gettysburg to Appomattox—Peters has become one of our most important historians." —Washington Times