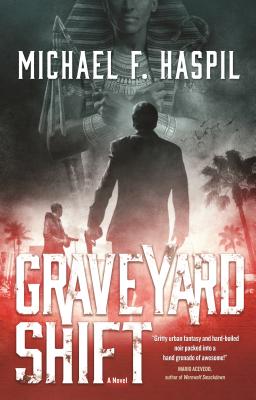 
When poisoned artificial blood drives vampires to murder, however, the city is pushed to the brink. Only an unlikely alliance with old enemies can give Alex and Marcus a fighting chance against an ancient vampire conspiracy.

If they succeed, they'll be hunted by everyone. If they fail, the result will be a war far bloodier than any the world has ever seen.

MICHAEL F. HASPIL is a veteran of the U.S. Air Force, where he distinguished himself as an ICBM crew commander. After retiring from the military, he served as a launch director at Cape Canaveral. He has been writing original stories for as long as he can remember and has dabbled in many genres. Graveyard Shift is his first novel.

“Those who enjoy police action mixed with urban fantasy may want to try this series launch.”—Library Journal, starred review

“The action is gritty, cinematic, and unrelenting...the worldbuilding is intriguing (as a figure drawn from Egyptian mythos, Alex injects fresh blood into undead tropes), and the reader runs no chance of growing bored during the tense race to the finish, in which a confrontation with an old enemy lays the groundwork for a potential sequel. Fans of urban fantasy, noir, and tightly choreographed action scenes will enjoy the blood and bullets in this adrenaline-heavy ride through crime scenes and secret societies.”—Kirkus Reviews

“This action-packed and fast-paced story begins with a murder investigation, plunging the reader into a world rife with intrigue, corruption, and a general sense of unrest....Haspil weaves elements from the old noir films as the detectives race to bring down a conspiracy to sabotage the vampires’ safe blood source. Fans of Jim Butcher will enjoy a fresh take on this supernatural crime novel that puts its own spin on the genre. Part crime novel and part fantasy, Graveyard Shift is a bloody good read.” — Booklist