The Damned of Petersburg: A Novel (The Battle Hymn Cycle #4) (Paperback) 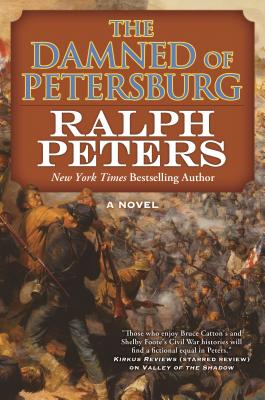 The Damned of Petersburg: A Novel (The Battle Hymn Cycle #4) (Paperback)

This is book number 4 in the The Battle Hymn Cycle series.

New York Times bestselling author Ralph Peters returns with the fourth installment in his Boyd Award-winning series on the Civil War, The Damned of Petersburg.

Glory turned grim, and warfare changed forever. From the butchery of The Crater, where stunning success collapsed into a massacre, through near-constant battles fought by heat-stricken soldiers, to the crucial election of 1864, The Damned of Petersburg resurrects the American Civil War's hard reality, as plumes and sabers gave way to miles of trenches.

Amid the slaughter of those fateful months, fabled leaders—Grant and Lee, Winfield Scott Hancock and A. P. Hill—turned for help to rising heroes, Confederates "Little Billy" Mahone and Wade Hampton, last of the cavaliers, or Union warriors such as tragedy-stricken Francis Channing Barlow and the fearless Nelson Miles, a general at twenty-four.

Nor does Ralph Peters forget the men in the ranks, the common soldiers who paid the price for the blunders of commanders who'd never know their names. In desperate battles now forgotten, such as Deep Bottom, Globe Tavern, and Reams Station, soldiers on both sides were pushed to the last human limits—but fought on as their superiors struggled to master a terrible new age of warfare.

The Damned of Petersburg revives heroes aplenty—enriching readers' knowledge of America's most terrible war—but above all, this novel is a tribute to the endurance and courage of the American soldier, North or South.

"Another brilliant addition to the best series of Civil War novels ever written.” —William Martin

“No one can come close to Peters’ unique combination of passion and pride and tragedy. I predict that The Damned of Petersburg will be a classic that people will read for the next fifty years.” —Thomas Fleming