Valley of the Shadow: A Novel (The Battle Hymn Cycle #3) (Mass Market) 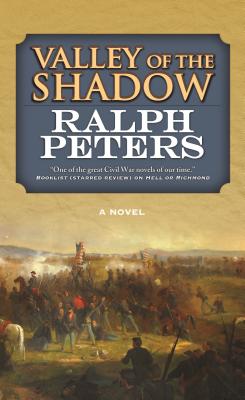 Valley of the Shadow: A Novel (The Battle Hymn Cycle #3) (Mass Market)

This is book number 3 in the The Battle Hymn Cycle series.

In the Valley of the Shadow, they wrote their names in blood.

From a daring Confederate raid that nearly seized Washington, D.C., to a stunning reversal on the bloody fields of Cedar Creek, the summer and autumn of 1864 witnessed some of the fiercest fighting of our Civil War, in mighty battles now all but forgotten.

The desperate struggle for mastery of Virginia's Shenandoah Valley, breadbasket of the Confederacy and the South's key invasion route into the North, pitted a remarkable cast of heroes in blue and gray against each other. From hungry, hard-bitten Rebel privates to a pair of Union officers destined to become presidents, from a neglected hero who saved our nation's capital and went on to write one of his century's greatest novels to doomed Confederate leaders of incomparable valor, Ralph Peters brings to life yesteryear's giants and their breathtaking battles with the same authenticity, skill, and insight he offered readers in his prize-winning Civil War bestsellers, Cain at Gettysburg and Hell or Richmond.

“[Peters'] immense knowledge of the tactics and the details of a soldier's life at that time are combined with a narrative drive that kept me turning pages late into the night.” —Karl Marlantes, author of Matterhorn

“His empathy and insight have never been more powerfully expressed. Valley of the Shadow is a blazing masterpiece.” —W.E.B. Griffin, New York Times bestselling author

“Historical fiction can do something that not even the best history texts can. It can make the reader say, ‘Yes, this is how it felt.' Looking for proof of this? Just open the Ralph Peters novel you are holding.” —George F. Will

“A gripping novel that is as historically accurate as it is enthralling.” —Victor Davis Hanson, author of Carnage and Culture

“Ralph Peters once again superbly demonstrates his complete mastery of the craft of writing historical fiction. . . . Indeed, Peters' great gift as a novelist is to bring real history to life and make readers feel what it was like-is like-to experience combat.” —Armchair General