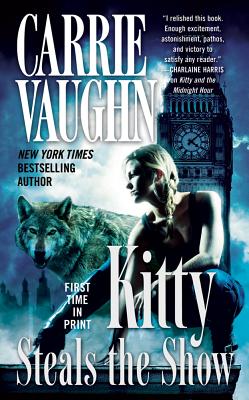 This is book number 10 in the Kitty Norville series.

Kitty has been tapped as the keynote speaker for the First International Conference on Paranatural Studies, taking place in London. The conference brings together scientists, activists, protestors, and supernatural beings from all over the world—and Kitty, Ben, and Cormac are right in the middle of it.

Master vampires from dozens of cities have also gathered in London for a conference of their own. With the help of the Master of London, Kitty gets more of a glimpse into the Long Game—a power struggle among vampires that has been going on for centuries—than she ever has before. In her search for answers, Kitty has the help of some old allies, and meets some new ones, such as Caleb, the alpha werewolf of the British Isles. The conference has also attracted some old enemies, who've set their sights on her and her friends.

All the world's a stage, and Kitty's just stepped into the spotlight.

“Vaughn's trademark sense of humor continues to distinguish this urban fantasy series, and the seamless integration of a variety of paranormal creatures (including vampires, werewolves, and shape-shifters) in the everyday world is entertaining…readers new to the Kittyverse will also find a fine introduction to this richly populated, fascinating paranormal world.” —Library Journal on Kitty’s Greatest Hits

“What makes Vaughn’s terrific stories really pop is how she manages to combine outright thrills with an offbeat sense of humor and then mesh it with Kitty’s dogged determination. The result—entertainment exemplified!” —RT Book Reviews, 4½ stars Top Pick! on Kitty’s Big Trouble

“The open nature of Kitty's character and the way Vaughn makes her such a likeable character make this the only urban fantasy world where I want to read every book of the series.” —The Denver Post