Daughter of the Forest: Book One of the Sevenwaters Trilogy (Mass Market) 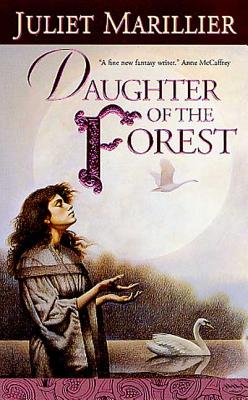 Daughter of the Forest: Book One of the Sevenwaters Trilogy (Mass Market)

This is book number 1 in the The Sevenwaters Trilogy series.

Daughter of the Forest, the first book in Juliet Marillier's award-winning Sevenwaters Trilogy.

Lovely Sorcha is the seventh child and only daughter of Lord Colum of Sevenwaters. Bereft of a mother, she is comforted by her six brothers who love and protect her. Sorcha is the light in their lives, they are determined that she know only contentment.

But Sorcha's joy is shattered when her father is bewitched by his new wife, an evil enchantress who binds her brothers with a terrible spell, a spell which only Sorcha can lift--by staying silent. If she speaks before she completes the quest set to her by the Fair Folk and their queen, the Lady of the Forest, she will lose her brothers forever.

When Sorcha is kidnapped by the enemies of Sevenwaters and taken to a foreign land, she is torn between the desire to save her beloved brothers, and a love that comes only once. Sorcha despairs at ever being able to complete her task, but the magic of the Fair Folk knows no boundaries, and love is the strongest magic of them all...

“I enjoyed it immensely...For an Irish resident, familiar with the mores and customs, Daughter of the Forest has special meaning and relevance. Juliet Marillier is a fine new fantasy writer--and what trials does she put her characters through in the next book?” —Anne McCaffrey

“Ms. Marillier's ability to use so well such a known legend and make it both logical and exciting is an outstanding gift. I am now, of course, eager to see 'what happens next.'” —Andre Norton