Cain at Gettysburg: A Novel (The Battle Hymn Cycle #1) (Paperback) 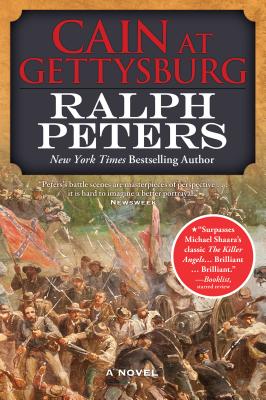 Cain at Gettysburg: A Novel (The Battle Hymn Cycle #1) (Paperback)

This is book number 1 in the The Battle Hymn Cycle series.

Two mighty armies blunder toward each other, one led by confident, beloved Robert E. Lee and the other by dour George Meade. They'll meet in a Pennsylvania crossroads town where no one planned to fight.

In this sweeping, savagely realistic novel, the greatest battle ever fought on American soil explodes into life at Gettysburg. As generals squabble, staffs err. Tragedy unfolds for immigrants in blue and barefoot Rebels alike. The fate of our nation will be decided in a few square miles of fields.

Following a tough Confederate sergeant from the Blue Ridge, a bitter Irish survivor of the Great Famine, a German political refugee, and gun crews in blue and gray, Cain at Gettysburg is as grand in scale as its depictions of combat are unflinching.

For three days, battle rages. Through it all, James Longstreet is haunted by a vision of war that leads to a fateful feud with Robert E. Lee. Scheming Dan Sickles nearly destroys his own army. Gallant John Reynolds and obstreperous Win Hancock, fiery William Barksdale and dashing James Johnston Pettigrew, gallop toward their fates….

There are no marble statues on this battlefield, only men of flesh and blood, imperfect and courageous. From New York Times bestselling author and former U.S. Army officer Ralph Peters, Cain at Gettysburg is bound to become a classic of men at war.

“A classic novel of warfare that will be read for years to come.” —W.Y. Boyd Literary Novel Award

“Incredibly well written and researched, this title should enter the ranks of the classics...highly recommended.” —Library Journal, starred review

“Peters captivates with his prose...meticulous research...Cain at Gettysburg is a great contribution to Civil War fiction.” —Washington Independent Review of Books

“May be the most realistic work of Civil War fiction every written.” —Case Shot & Canister

“Peters's battle scenes are masterpieces of perspective…it is hard to imagine a better portrayal.” —Newsweek

“Ralph Peters has given us a great treasure! Superbly crafted, this wonderful saga pulls you right into the ranks of men marching to meet their destiny.” —John W. Mountcastle, Brigadier General, U.S. Army (Ret), former Army Chief of Military History

“A classic for the ages, a supremely truthful look at the horrors of war and a battle that shaped who we became as a people…a bookshelf treasure…a masterpiece.” —New York Journal of Books

“A great retelling of the Battle of Gettysburg...His approach is fresh, original, and outstanding in every respect.” —Gen. Sid Shachnow, U.S. Army Special Forces (Ret.)