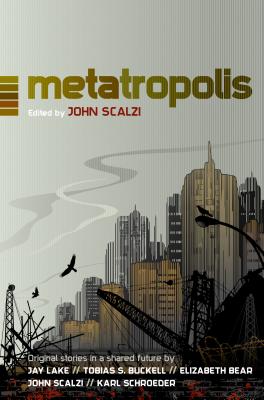 More than an anthology, Metatropolis is the brainchild of five of science fiction's hottest writers—Elizabeth Bear, Tobias Buckell, Jay Lake, Karl Schroeder, and project editor John Scalzi—-who combined their talents to build a new urban future, and then wrote their own stories in this collectively-constructed world. The results are individual glimpses of a shared vision, and a reading experience unlike any you've had before.

A strange man comes to an even stranger encampment...a bouncer becomes the linchpin of an unexpected urban movement...a courier on the run has to decide who to trust in a dangerous city...a slacker in a "zero-footprint" town gets a most unusual new job...and a weapons investigator uses his skills to discover a metropolis hidden right in front of his eyes.

Welcome to the future of cities. Welcome to Metatropolis.

John Scalzi won the 2006 John W. Campbell Award for Best New Writer, the 2013 Hugo Award for Best Novel for Redshirts, and his debut novel Old Man’s War was a finalist for Hugo Award as well. His other books include The Ghost Brigades, The Android’s Dream, The Last Colony and The Human Division. He has won the Romantic Times Reviewers Choice Award for science-fiction, the Seiun, The Kurd Lasswitz and the Geffen awards. His weblog, The Whatever, is one of the most widely-read web sites in modern SF. Born and raised in California, Scalzi studied at the University of Chicago. He lives in southern Ohio with his wife and daughter.

“Editor Scalzi (Zoe's Tale) and four well-known writers thoughtfully postulate the evolution of cities, transcending postapocalyptic clichés to envision genuinely new communities and relationships.... Each story shines on its own; as a group they reinforce one another, building a multifaceted view of a realistic and hopeful urban future.” —Publishers Weekly, starred review

“Scalzi and his contributors/collaborators have created a fascinating shared urban future that each of them evokes with his or her particular strengths. Originally an audio anthology, this stellar collection is a fascinating example of shared world building, well deserving of a parallel life in print.” —Booklist