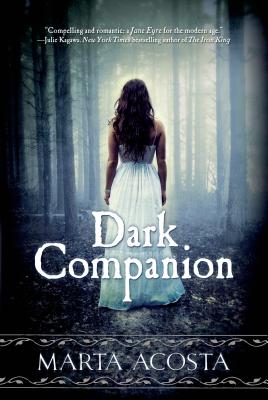 By Marta Acosta
Please email or write store for pricing and availability information.
Out of Print

Jane Eyre meets Twilight in Dark Companion, a lush and romantic Gothic YA debut by Latina author Marta Acosta—now in trade paperback
Orphaned at the age of six, Jane Williams has grown up in a series of foster homes, learning to survive in the shadows of life. Through hard work and determination, she manages to win a scholarship to the exclusive Birch Grove Academy. There, for the first time, Jane finds herself accepted by a group of friends. She even starts tutoring the headmistress's gorgeous son, Lucien. Things seem too good to be true.

The more she learns about Birch Grove's recent past, the more Jane comes to suspect that there is something sinister going on. Why did the wife of a popular teacher kill herself? What happened to the previous scholarship student, whose place Jane took? Why does Lucien's brother, Jack, seem to dislike her so much?

As Jane begins to piece together the answers to these puzzles, she must find out why she was brought to Birch Grove—and what she would risk to stay there….

MARTA ACOSTA is the author of the award-winning Casa Dracula series. She received degrees in creative writing and literature from Stanford University and was a frequent contributor to the San Francisco Chronicle and the Contra Costa Times. Her books have been selected as: Book Sense Pick, Fresh Fiction Fresh Pick, Catalina Magazine Humor
Book of the Year, and BookPage Notable pick. Marta lives in the San Francisco Bay Area with her family.

“This enjoyable, chick-lit update of undead culture gives vampires and their victims a long-overdue makeover. It's a breath of fresh air in a genre marked by creaky gender relations and unchallenged class stratification…. Acosta's savvy take on sexist vampire traditions is refreshing.” —Kirkus Reviews

“Acosta's story is an impressive contender in the crowded YA paranormal field.” —Publishers Weekly