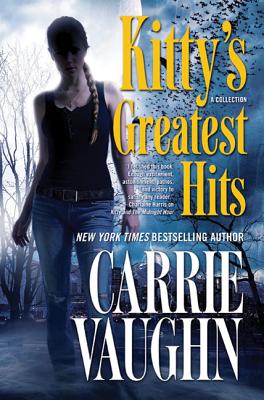 Kitty Norville, star of a "New York Times "bestselling series, is everybody's favorite werewolf DJ and out-of-the-closet supernatural creature. Over the course of eight books she's fought evil vampires, were-creatures, and some serious black magic. She's done it all with a sharp wit and the help of a memorable cast of werewolf hunters, psychics, and if-notgood- then-neutral vampires by her side. "Kitty's Greatest Hits "not only gives readers some of Kitty's further adventures, it offers longtime fans a window into the origins of some of their favorite characters.

In "Conquistador de la Noche," we learn the origin story of Denver's Master vampire, Rick; with "Wild Ride," we find out how Kitty's friend T.J. became a werewolf; and in "Life is the Teacher," we revisit Emma, the human-turned-unwilling-vampire who serves the aloof vampire Master of Washington, D.C.

This entertaining collection includes two brand-new works: "You're On the Air," about one of Kitty's callers after he hangs up the phone; and the eagerly awaited "Long Time Waiting," the novella that finally reveals just what happened to Cormac in prison, something every Kitty fan wants to know.

Carrie Vaughn is the New York Times bestselling author of the Kitty Norville books, including Kitty's Big Trouble, Kitty Goes to War, and Kitty and the Midnight Hour. She is also the author of the standalone novels After the Golden Age and Discord's Apple, and the young adult books Voice of Dragons and Steel. Vaughn had the nomadic childhood of the typical Air Force brat, with stops across the country from California to Florida. She earned her B.A. from Occidental College in Los Angeles, and a master's in English from the University of Colorado at Boulder. She has worked as a Renaissance Festival counter wench, a theater usher, an editor, a buyer at an independent bookstore, and an administrative assistant. She lives in Boulder, Colorado.

“Do you like werewolves?  Vampires?  Talk radio?  Reading?  Sex?  If the answer to any of those is yes, you’re in for a wonderful ride.”
--Gene Wolfe on Kitty and the Midnight Hour


“Vaughn takes on PTSD and gives it a new twist in the latest Kitty adventure…Vaughn’s deft touch at characterization and plot development has made this series hugely entertaining and not to be missed!”
--Romantic Times Book Reviews on Kitty Goes to War


“Kitty doesn't have her usual pack, but she still emerges as a leader. We know going in this isn't going to go well — but Vaughn makes it suspenseful and interesting through the voice of Kitty.”
--The Denver Post on Kitty's House of Horrors